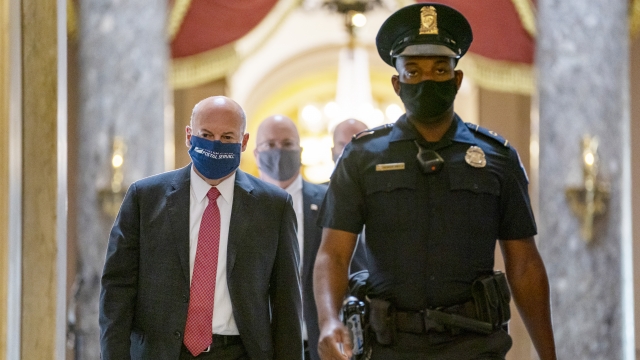 SMS
Postmaster General Earned Millions From Company Tied To U.S.P.S.
By Johannah Grenaway
By Johannah Grenaway
August 18, 2020
The news is raising concerns of a conflict of interest, but Louis DeJoy told the New York Times he has fully complied with federal ethics rules.
SHOW TRANSCRIPT

Postmaster General Louis DeJoy earned millions of dollars last year from a company that has financial ties to the U.S. Postal Service.

According to the New York Times, DeJoy earned anywhere from one to seven million dollars from XPO Logistics, which helps the Postal Service during busy shipping periods. The news is raising concerns of a conflict of interest. But DeJoy — who had previously served as CEO and a board member of the company — told the Times he has fully complied with federal ethics rules.

President Trump may have had undue influence over the selection of the New Postmaster General. That’s according to a former Postal Service board member, David Williams, who will reportedly brief House Democrats Thursday about how DeJoy got his job.

Williams stepped down from his role after claiming the president influenced the board’s selection process.

DeJoy agreed to testify before the House next week about his policy changes and cost-cutting efforts like removing high-speed mail sorting machines.

Congressional Democrats are also critical of the Postal Service board, reminding members they can reverse decisions made by the Postmaster General.

DeJoy is also testifying before the Senate this Friday to address mail delays. Under pressure, he released a statement Tuesday saying he is suspending some controversial initiatives until after the election is concluded. He said, quote, "the Postal Service is ready to handle whatever volume of election mail it receives this fall."