Policies Are Changing, Budgets Are Shrinking, But Protesters Want More 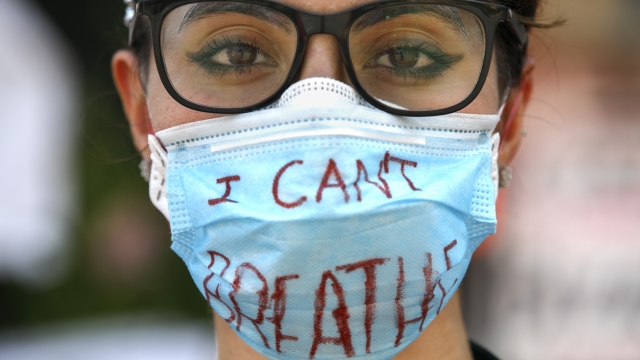 Chants are translating to change across the country. But shrinking budgets and shifting rules scratches the surface of the problem

Every day since George Floyd's death on a street in Minneapolis, his neck pinned under the knee of a former Minneapolis police officer, hundreds of thousands have marched across the country, demanding an end to the systems and policies that have endured through centuries of racism.

Finally, more than two weeks after the latest in a long list of Black deaths at the hands of police, people in power are listening.

In Los Angeles, Mayor Eric Garcetti committed to taking more than $100 million from the budget of his city's police force and reinvesting in resources for communities of color.

From coast to coast, budgets are coming down, police departments are changing the rules and leaders are pushing for more sweeping change.

In Minneapolis, the city council vowed to replace the police force.

But the changes so far aren't enough to appease the masses peacefully demanding the act of policing, itself, fundamentally change.

"We want to divest at least 10%," Bria Smith, an organizer in Milwaukee, said of the police department's budget. "We know that can be invested into community initiatives that are led by Black and brown young people."

What Does 'Defund The Police' Mean?

The once-obscure slogan has become a rallying cry for protesters calling out police brutality and racial disparities in policing.

Milwaukee's police budget is almost $300 million this year, a $1.5 million change from 2019. But if protesters get what they want, the budget will come down almost another $30 million.

Beyond budgets, activists want to see an end to chokeholds and a requirement to exhaust all other options before an officer uses force. Both are changes Houston's mayor announced Tuesday during a celebration of life for George Floyd.

In Denver, the police department also announced a ban on chokeholds. It's also expanding body cameras to SWAT teams and requiring reporting any time an officer intentionally points a gun.

Protesters gathered on the steps of Colorado's Capitol building in Denver aren't happy.

"We are proponents of abolishing the police and reimagining the police, so it’s not enough, really," Katie Leonard, an organizer with the group Anti-Racist Club, said.

Inside the Capitol, lawmakers are considering a bill that would make sweeping changes across the state, including to police accountability.

"If a law enforcement officer acts criminally, they should be held to criminal standards," state Rep. Leslie Herod said.

Proposals for police reform want national standards on use of force and a database to track officer discipline. But those are hard to do without data.

But critics worry about the cost associated with making the changes and stripping protections from officers who claim their use of force happened in "good faith."

George H. Brauchler, district attorney for Colorado's 18th District, told a committee of lawmakers considering the bill, "Even if you try to do the right thing, and you do it the way you're trained, and at the time you think it's lawful — if you guess wrong, that's it, man. You lose your house."

But as the names of Black men and women killed in police custody stack up, it's clear something has to change.

On the national level, congressional Democrats announced a bill Monday aimed at making it easier to prosecute officers who wrongly kill, allowing citizens to sue officers for alleged misconduct, and clearing the way for state and federal investigations.

"True justice can only be achieved through full comprehensive action," Speaker of the House Nancy Pelosi said at an event Monday. "That's what we are doing today."

But with hiccups already on the horizon for policy-makers in Washington and the party's star players disagreeing about whether to pursue "defunding the police," it's clear city halls and state Capitols around the country is where the fastest, most meaningful change is likely to happen.

“National policymakers can really sway the public in helpful ways to even pay attention to what’s going on in local government,” Emily Mooney, a criminal justice and civil liberties expert at R Street, said. "[But] local funding is going to be what’s most important.”