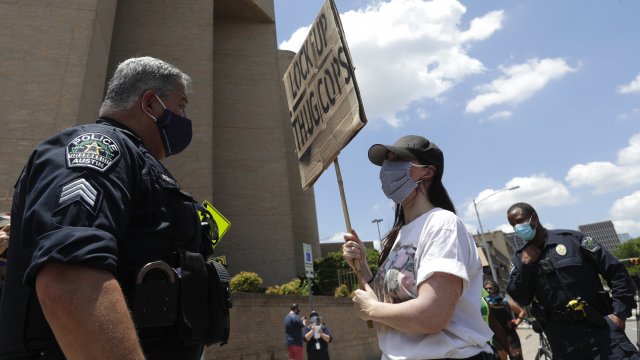 SMS
'Defund the Police' Experiment Fully Underway In Austin, Texas
By Jamal Andress
By Jamal Andress
February 22, 2021
While cities like Baltimore and Denver cut police budgets by 3% or 10%, Austin cut its by a third — $150 million.
SHOW TRANSCRIPT

Over the summer, chants to “defund the police” rang out across the country. But hardly anyone cut their police budget by as much Austin, Texas. While cities like Baltimore and Denver cut their budgets by 3% or 10%, Austin cut APD's budget by a third — $150 million.

And they've already started spending that money on other programs—buying two hotels with plans to convert them into permanent supportive housing for the homeless.

"The Black Lives Matter movement really ascended in our cities, it created an opportunity for us to move the dollars that so often are used to police homelessness—to throw people in jail for a night and then to send them back onto the streets— to take those same dollars, and use them to actually operate the hotels," Austin city council member Greg Casar said.

To operate these hotels, it'll take about $6.5 million dollars annually, but the backlash to any reallocation of police funds in this very red state has been swift and widespread.

"Crime is up because police funding is down. That's the wrong direction for the state of Texas," State Rep. Briscoe Cain said.

"We will not stand idly by as violent criminals take over the streets of our communities," U.S. Attorney for the Western District of Texas Gregg Sofer said.

"The city of Austin is a disaster … one of the most dangerous cities in America and definitely in Texas," Texas Lt. Gov. Dan Patrick said.

The Texas governor has threatened to remove Austin police from the city's control, freeze property tax revenues and bring in federal law enforcement—all in the interest of public safety.

And while Austin isn't one of the most dangerous cities in the U.S., or even in Texas, it has seen a rise in homicides from 26 in 2019 to 40 in 2020. Other large cities in the state experienced similar rises in homicides, including both Houston and Fort Worth — two cities that increased their police budget this year.

Austin City Councilman Greg Casar, who spearheaded the police defunding effort, says housing for the homeless is exactly the kind of action that will make the city safer.

Casar said: "Lying about Austin doesn't make anyone safer. But setting up homeless shelters does make people safer. … These are real issues that the governor and lieutenant governor don't want to talk about, that policing doesn't solve entirely on its own, and that we are actually bringing dollars forward to help solve the issue."

Austin's housing program is similar to one in Los Angeles that housed about 3,500 chronically homeless people. Like Los Angeles, Austin plans to offer wraparound services, meaning not only housing but a case manager for residents and other social services.

It also pays for itself. According to Hunter, for every dollar Los Angeles' health department spent on this housing program, the city saved $1.20—dramatically reducing expensive trips to the emergency room and long-term hospital stays.

Hunter said: "What it suggests is we're already as a society, paying a lot of money to provide services to people experiencing homelessness, and the provision of permanent supportive housing may actually be a more effective use of those funds."

Austin's reforms have extended beyond the police budget, with the city adding a “mental health option” for 911 calls and proposing an independent Office of Police Oversight.

"I believe lots of other cities can follow Austin's example because unfortunately, many cities have over relied on policing and jailing as our primary response to social issues. … That's something that doesn't just exist here in Austin, it exists all over the country," Casar said.