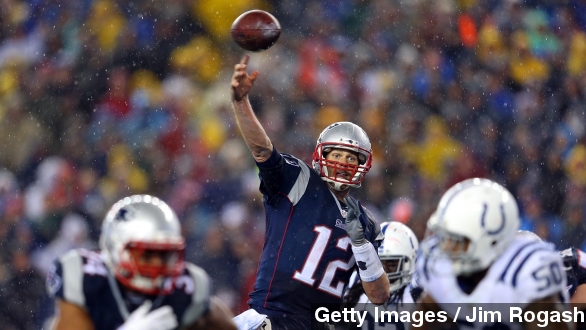 An NFL investigation found the New England Patriots did in fact use deflated footballs in their AFC Championship 45-7 blowout of the Indianapolis Colts.

According to ESPN and an NFL letter seen by The Boston Globe, 11 out of the 12 footballs the Pats used during the game were under-inflated by two pounds each, which is against league rules.

The NFL's vice president of communications said the league declined to comment, but one ESPN source described the NFL as "disappointed ... angry ... distraught" over the matter.

NFL rules say a football must be filled with 12.5-13.5 pounds per square inch of air, and the home team must provide 36 footballs for outside games, which are subject to league testing before the game. The Patriots, of course, had home field advantage throughout the playoffs.

The idea behind deflating footballs is simple: A ball with less air could be easier to grip, throw, hold onto and more, especially in poor weather — which is exactly what the Patriots and Colts were dealing with last Sunday.

The so-called "Deflate-Gate" blew up online almost immediately after the news broke. And with a shot at Super Bowl glory on the line, it's easy to see why.

Prior to the investigation, the league said "Deflate-Gate" won't be affecting the Pats' 2015 Super Bowl chances. The NFL had said it probably won't reverse the decision and will instead impose a penalty on draft picks and a monetary fine on the organization.