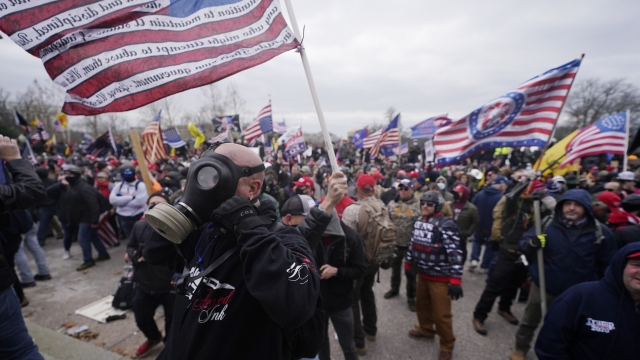 In the aftermath of the chaos on Capitol Hill — where four people died and an armed standoff occurred in the House chamber — media outlets, politicians and political experts are trying to find the words to explain exactly what happened.

Some words like "protest" and "riot" were used almost interchangeably, but the implications of each term matters, especially when it comes to accurately describing the violence that occurred.

Stephen Farnsworth, professor of political science at the University of Mary Washington: "Some people are going to want to use words that minimize what happened, because they don't want to be tied to such extreme behavior."

In a sample of more than 100 different online articles from 17 different news outlets published over the course of the day, Newsy found the most common words used to describe the Capitol breach were "violence," "protest," "mob" and "riot." Some have criticized the use of the word "protest," and one expert explained to Quartz it's because the word "gives this veneer of a legitimate form of participation in the democratic process."

Farnsworth: "Make no mistake about it: This hasn't happened for 200 years. And so to say that it's a riot along the lines of people after a Big 10 football game or something is ridiculous."

President-elect Joe Biden: "It's not protest. It's insurrection."

Alongside President-elect Joe Biden, former President George W. Bush and Republican Sen. Mitt Romney also notably used the term "insurrection" to describe yesterday's events. More than "mob" or "riot," the word specifies a violent uprising against authority — and it carries both historical precedence and legal implication in the U.S. Code.

"This was a deliberate effort to block the actions of the U.S. Congress, and using violence to stop lawmaking to shut the government down, even for a few hours, is the very definition of something beyond a riot."