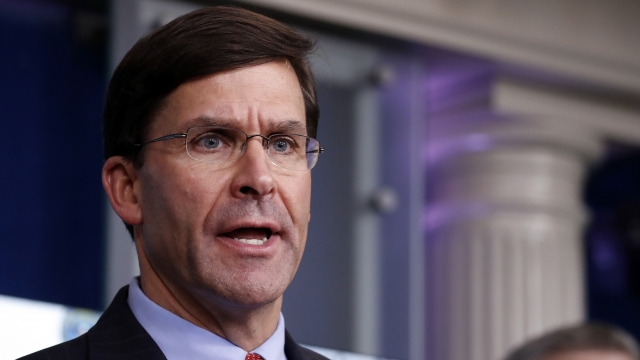 In a rare move, Defense Secretary Mark Esper is speaking out publicly against proposals by President Donald Trump.

"The option to use active duty forces in a law enforcement role should only be used as last resort and only in dire situations. ... I do not support invoking the Insurrection Act."

Esper says he disagrees with the president's threat to send the military to some states.

And just hours after Esper confirmed deploying 1,600 active-duty military to Washington, D.C., some of those troops reportedly received orders to go back to their home base. Newsy confirms Esper overruled that order, meaning all of the troops will stay.

The defense secretary is facing internal pressure inside the Pentagon on not just troop deployments but also the force used against protesters near the White House Monday night.

Rubber bullets and chemical agents were fired at peaceful protesters before the president's photo-op outside a damaged church.

In the wake of the decision, a former top Pentagon policy official, James Miller, resigned from the defense advisory board.

In his resignation letter, leaked to The Washington Post, Miller called it an "appalling use of force."

Esper attempted to distance himself from the decision.

"I did know we were going to the church. I was not aware a photo-op was happening."

Esper claimed his forces were not involved in some of the more severe actions, including the use of chemical agents and several helicopters, flying low, seemingly to intimidate protesters.

Esper went further than the president in condemning the killing of George Floyd, calling it a horrible crime and pressing for the officers involved to be held accountable.

"This is a tough time for our country. ... My hope is that we see peaceful demonstrations that honor George Floyd, that press for accountability for his murder, that move us to reflect about racism in America, and that serve as a call to action. This is the America that we're committed to serving with our lives."