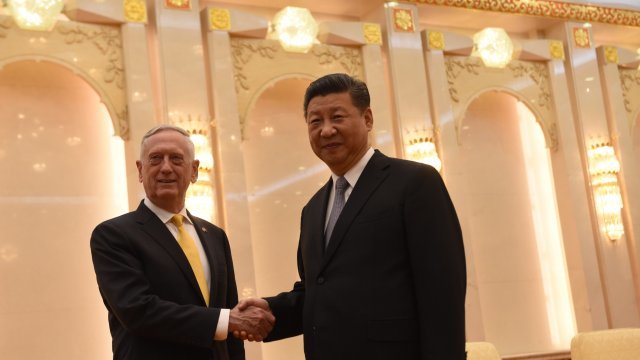 Mattis met with President Xi Jinping on Wednesday and discussed areas of both contention and agreement between the two nations. China has applauded recent negotiations with North Korea, and it's long been an advocate for the so-called "freeze-for-freeze" compromise in which North Korea suspended nuclear testing in exchange for the U.S. suspending military drills in the region.

But other topics were more sensitive. Xi reportedly said China "cannot lose even one inch of the territory left behind by our ancestors." He also said China isn't seeking to take territory away from anyone.

That seems like a reference to Taiwan, a self-governing democratic island China still claims as part of its territory. The U.S. arms the island and has pledged to maintain a military presence in the South China Sea.

Mattis will leave China to visit South Korea and Japan.