Kim Potter's Ex-Chief: 'I Saw No Violation' Of Policy By Officer 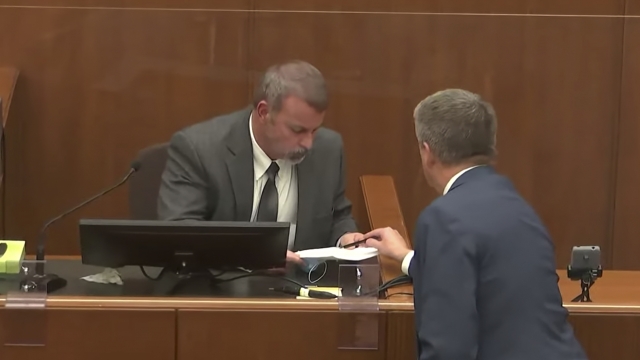 SMS
Kim Potter's Ex-Chief: 'I Saw No Violation' Of Policy By Officer
By Associated Press
By Associated Press
December 16, 2021
Prosecutors rested their case Thursday against Kim Potter who is charged with first- and second-degree manslaughter in the killing of Daunte Wright.

Kim Potter's police chief at the time she shot and killed Daunte Wright testified in her defense at her manslaughter trial on Thursday, calling her "a fine officer" and saying he "saw no violation" of policy in her actions at the scene.

Tim Gannon resigned two days after the April 11 shooting, saying he believed he had to quit "because I would not immediately fire Kim Potter." Potter resigned the same day.

Potter, 49, is charged with manslaughter in Wright's death. During an April 11 traffic stop in the Minneapolis suburb of Brooklyn Center, the 20-year-old Black motorist broke away from officers trying to arrest him and was attempting to drive away when Potter shot him. Body-camera video captured Potter, who is white, shouting "I'll tase you!" and "Taser, Taser, Taser!" before she fired once.

Under questioning from Potter attorney Earl Gray, Gannon testified that he viewed body-camera video immediately after the shooting and squad car video recently, and when he had "all the data in front of me, I saw no violation."

"Violation of what?" Gray asked.

On cross-examination, prosecutor Matthew Frank asked Gannon whether it was consistent with policy "for an officer to not know they have their firearm in their hand when they shoot it."

Potter's attorneys have argued that she would have been within her rights to use deadly force even if she had intended to do so because a fellow officer was endangered by Wright's attempt to flee.

Gannon testified that it appeared to him from squad car video that Sgt. Mychal Johnson, who was assisting in the stop, was "leaning into" Wright's car. He said it was his opinion that deadly force was reasonable.

Gannon recalled his own experience in a situation where he was dragged by a car. He said he felt "sheer terror" and a feeling of "simply trying to survive."

Prosecutors called police witnesses to build their argument that Potter was an experienced officer who had been thoroughly trained in use of a Taser, including warnings about the danger of confusing one with a handgun. They have to prove recklessness or culpable negligence if they are to win a conviction on the manslaughter charges.

The death of Wright set off angry demonstrations for several days in Brooklyn Center. It happened as another white former officer, Derek Chauvin, was standing trial in nearby Minneapolis for the killing of George Floyd.

Gannon said Potter was known for handling calls, acting professionally and writing good police reports. He testified that she volunteered with a group that helped out when officers were killed in the line of duty. She also worked on domestic abuse cases and was a field training officer.

Earlier Thursday, the defense opened its case with use-of-force expert Stephen Ijames, a former assistant police chief in Springfield, Missouri. Ijames testified that officers were legally bound to arrest Wright after discovering he had a warrant for an outstanding weapons violation.

Ijames also testified it was very unlikely that Wright could have driven away had Potter actually used her Taser. That pushed back against a prosecution use-of-force expert who testified earlier that using either a gun or a Taser on Wright would have made things worse because he could have been incapacitated and his vehicle could have become a weapon.

After Potter shot Wright, his car took off and crashed seconds later into an oncoming vehicle, hurting several people.

Ijames, who said he wrote the Taser policy for the International Association of Chiefs of Police, told the court Thursday that he disagreed with a prosecution use-of-force expert who testified that Potter was too close to Wright for the Taser to be effective.

Ijames said a Taser is the most effective tool to incapacitate someone when used properly, second only to a gunshot to the head. He also said officers had to assume that Wright "very likely could have a gun" because he had one in the past, and that it would have been a "dereliction of duty" for them not to have tried to arrest him.

But Ijames testified that deadly force is warranted if an officer is halfway inside a vehicle that is about to be put into drive. In Wright's case, two other officers were trying to get him out of the car when Potter shot him.

He later agreed under questioning by the state that deadly force would not have been reasonable if an officer in Potter's position was unaware that one of the other officers was unable to exit the vehicle.

Frank noted that Ijames' written report did not state that Potter had acted as "an objective officer" would have done in a similar situation, a phrase the state has often invoked during the trial.

Frank also seized on a part of Ijames' report in which he said Potter's single trigger pull backed up the idea that she meant to use her Taser. That's because officers intending to use deadly force are often trained to fire more than once.

The defense also called several character witnesses for Potter. Former Brooklyn Center Officer Colleen Fricke testified about working alongside Potter, saying she saw her as a mentor and friend.

Fricke was asked to watch over Potter after the shooting. "I saw her curled up in the corner of the room" — by herself and crying, Fricke said.

It wasn't clear when Potter would take the stand.

The case is being heard by a mostly white jury.