Defense Bill Could Give Trump The TV Network Of His Dreams 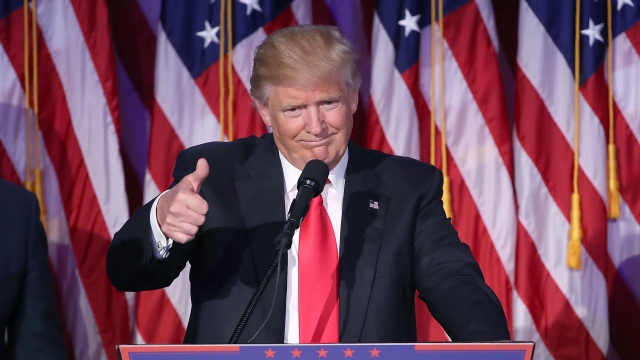 SMS
Defense Bill Could Give Trump The TV Network Of His Dreams
By Matt Picht
By Matt Picht
December 12, 2016
The Broadcasting Board of Governors controls U.S. programming for 100 different countries, and Trump will get to pick its CEO.
SHOW TRANSCRIPT

Remember all those rumors about a Trump-themed TV network that would have given Donald Trump a consolation prize if he lost the election?

Well, the president-elect might be able to have his cake and broadcast it, too. When Trump takes office, he'll take the reigns of a powerful, multinational media network.

That's reportedly thanks to House Foreign Affairs Chairman Ed Royce. He slipped a provision into this year's nearly $620 billion defense spending bill dissolving the Broadcasting Board of Governors.

Royce says his provision is about streamlining the BBG's executive structure. He said in a statement the BBG "must be revitalized to effectively carry out their mission in this age of viral terrorism and digital propaganda."

The BBG is an independent program that oversees U.S. government-backed media outlets like Voice of America, Radio Free Europe, Radio and Television Martí, and more. All told, its programming broadcasts in 100 different countries and 61 different languages.

The agency was previously run by a bipartisan board of eight governors. Under the new rules, it'll be controlled by one chief executive officer — selected by the president.

One Republican official told Politico the BBG appointment could give Trump direct influence over the BBG's editorial content, saying "the firewall will get diminished and attacked, and this could fall victim to propaganda. ... It's going to be bad for U.S. international broadcasters and their credibility."

Trump hasn't given any sign he plans to overhaul the BBG's programming when he takes office. And the Senate would have to confirm his selection for BBG CEO.