Defecting From Cuba To Play Baseball In The US: Then Versus Now 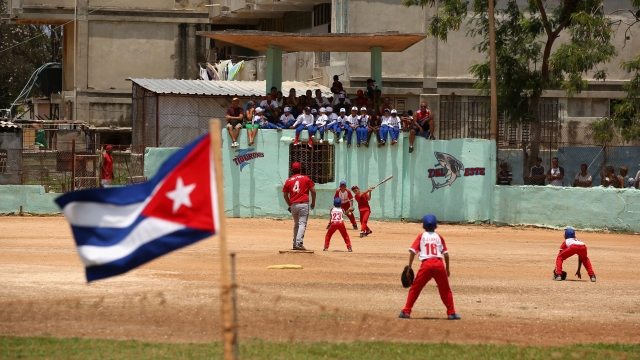 SMS
Defecting From Cuba To Play Baseball In The US: Then Versus Now
By Matt Moreno
By Matt Moreno
March 22, 2016
As of mid-March, Cuban citizens can now work and receive salaries from U.S. companies. That means Cuban MLB players don't have to defect.
SHOW TRANSCRIPT

Some left everything they knew and loved, risking it all, including their lives, just for the chance to play baseball in the U.S.

Now, the next generation of Cuban baseball players hoping to make it in the big leagues will have a much safer route there.

As of mid-March, Cuban citizens can now work and earn salaries from U.S. companies.

That means Cuban baseball players can negotiate and sign with MLB teams directly. Before, players would need to defect to another country, establish residency, and then try to secure a major league deal.

And that was no safe journey. In the case of Los Angeles Dodgers outfielder Yasiel Puig, his defection story involves days-long journeys, sleepless nights, smugglers, death threats and more.

And Puig's story isn't that different from others who've defected. This change of stance by the U.S. government, though, means Cubans can hopefully avoid those dangerous journeys.

While the United States and Cuba continue to thaw diplomatic relations, Major League Baseball is doing some thawing of relations of its own.

In December, MLB held a camp for kids in Havana featuring several Cuban players some of who'd defected just years prior.

The players, who had to be approved by the Cuban government, weren't allowed to return to their Cuban homes and were only able to see family members at approved hotels.

On Tuesday, the Tampa Bay Rays will continue MLB's mission to play goodwill ambassador by playing a game against the Cuban national team. President Obama is expected to be in attendance.

Roughly 70 players have defected from Cuba and gone on to appear in an MLB game.

This video includes clips from Voice of America and Martí Noticias, and images from Getty Images.