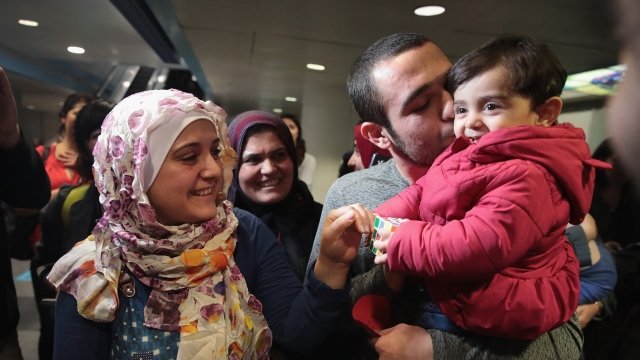 SMS
Record Decline In Refugees Goes Beyond Trump's Campaign Promise
By Ben Schamisso
By Ben Schamisso
May 25, 2018
Donald Trump promised fewer Muslim refugees in the U.S. during his campaign. His administration has achieved that mostly through bureaucracy.
SHOW TRANSCRIPT

"Many people live in camps for years and years and years and have no opportunities to resettle in the U.S. or in Europe. Resettlement gives them a chance at a new life and a chance to rebuild their life and so that their children can go to school and be educated," said Suzanne Akhras.

Akhras is the founder of a nonprofit that helps Syrian refugees assimilate in the U.S. Some groups like hers are downsizing as the flow of refugees slows to a trickle, but she's determined to stay open.

Around 13,000 refugees have entered the country so far this fiscal year. Compare that to the 53,000 the year before or 85,000 the year before that. This year is on track for the lowest number of refugees admitted since 1980, when the resettlement program was created. Unsurprisingly, the steepest decline has been for Muslim refugees.

The White House has dramatically reduced the annual cap on admitted refugees to 45,000. Yet it almost certainly won't be met at this rate. 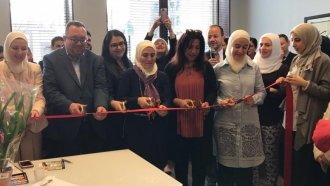 If that seems like a straightforward result of President Donald Trump's campaign promise, it's really thanks to a complicated mix of executive actions and behind-the-scenes bureaucracy.

The White House has added steps to some application processes, cut the staff that deals with refugee requests and increased the number of countries it considers high-risk. That's in line with the White House's efforts to strengthen our national security while cutting back on international diplomacy.

"It means that you're really destroying the program that has been life saving for many people. It means more people are desperate, more people are vulnerable," Akhras said.

A State Department official told The New York Times that the decline in refugee resettlement may be a result of more thorough screening procedures. She also said there are other ways the U.S. can help refugees. For example, she said, the U.S. will continue to provide humanitarian assistance to displaced people close to their homes until "they can safely and voluntarily return home."

Many refugee resettlement agencies who partner with the government have closed branches. That's because the State Department announced in December that locations that help resettle fewer than 100 refugees annually may be phased out. And this worries people like Akhras, who hopes resettlement numbers will go up again eventually.

"By the time you rebuild this program again, you've lost the people who have the organizational memory to be able to sustain the work and to grow it again and to improve on it." Akhras said.