Deciphering The Symbols Of The Jan. 6 Insurrection 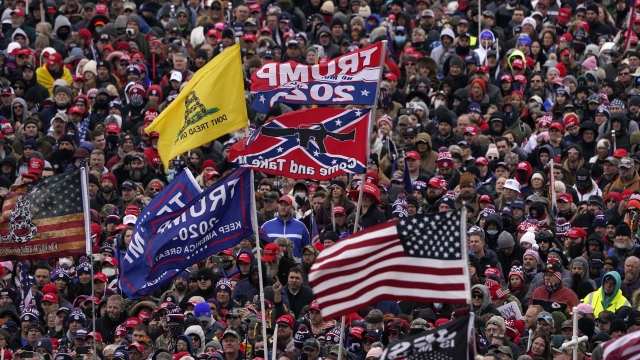 There are photos and videos etched in our minds, but take a look a little closer and you'll see more than just crowds on those steps and in those halls on Jan. 6. People were wearing symbols and waving flags that scream silent messages all on their own.

Laura Scofield is a vexillologist, a fancy term for someone who studies flags. She says they're the most powerful artifact ever created and an impulse of society to represent itself.

"Flags are still the device that we use to showcase who we are — to show where we want to belong," she said. "It's about an inside and outside. I'll say in that specific moment, since they were inciting violence, flags there were supposed to incite fear. They were all there giving people warning."

It was a sea of symbolism that day, from American flags to Nazi imagery, Confederate flags, the Gadsden flag.

Brian Hughes, who founded the Polarization and Extremism Research and Innovation Lab — or PERIL — at American University, says all of the different symbols represent a large right-wing tent of sorts.

"They serve as a rallying point for the extremists who identify with them, support them and spread them," he said. "And they act as a kind of terroristic propaganda to the groups that are targeted by them."

Propaganda is not new. It's painfully familiar. In fact, Corey Fleischer now spends his days combating it all over the world.

"When I saw that first swastika, it might as well have had a picture of my face on it with my name on it," he said. "It's like, boom, here you go. Just a reminder, you know, we hate you."

Fleischer is the founder of Erasing Hate, where he quite literally erases swastikas and other hateful messages off the sides of buildings all over the world that communities have allowed to exist, sometimes for decades.

"I think the major issue with what's going on is leaving these symbols up. That's the situation here. It's the lack of action. It's the lack of being proactive in order to remove these things," Fleischer said. "Until it's fully removed, you know, the cycle of hate will still be there."

And Hughes says seeing symbols in your hometown is damaging, as was seeing them hoisted inside the Capitol.

"The fight-or-flight responses that people feel when they encounter these hate symbols that express hatred towards them have actual physiological consequences on their long-term health," Hughes said.

But Hughes says it's not just about the obvious symbols we know to be hateful. It's about the ones we don't see that way — like the American flag — that the extreme right is enmeshing with their messaging.

Both Hughes and Scofield say no matter the number of years, some symbols never lose their meaning, while others evolve. But it's also new symbolism they believe we should be paying attention to.

"If you take a drive through a part of the country where you used to see a lot of Confederate flags, the fact is, you see fewer Confederate flags nowadays," Hughes said. "What's replaced them is Donald Trump flags."

Ultimately, they say the symbols themselves take a back seat to the messages behind them. And that will take a much deeper effort than banning them from protests or removing them from sidewalks.

"It's about addressing the root causes, the vulnerabilities in our society that make it — in the present day — such a fertile ground for extremism to develop," Hughes said.