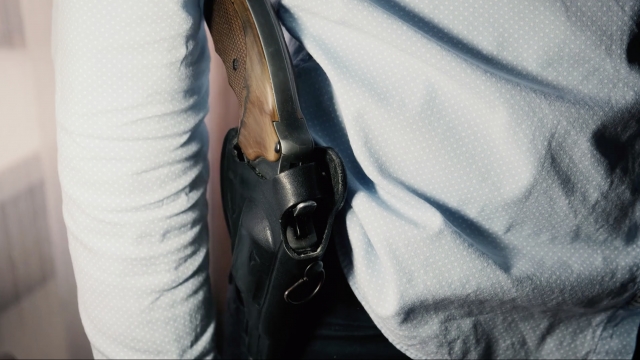 SMS
Law Enforcement Opposed To Proposed Permitless Firearm Carry Bills
By Jamal Andress
By Jamal Andress
February 2, 2022
Existing permits are a tool to keep track of who is and isn't allowed to carry a firearm.
SHOW TRANSCRIPT

A new gun law debate has pitted two longtime political allies against each other — law enforcement and the gun lobby.

States like Georgia, Alabama, Florida and Ohio are all considering bills that would allow citizens to buy and carry guns without a permit in what is often referred to as constitutional carry.

Derrick Cunningham is Montgomery's first Black Sheriff and the president of the Alabama Sheriff's Association.

"I just don't see — why we are trying to fix a problem that's not broken right now," he pondered. "Right now, if you stop a car, and that person has a loaded firearm in the vehicle, and that person does not have a permit, they go to jail. So what we're about to do, basically, is take away that ability for law enforcement officers that encounter these situations to be able to have a tool to be able to deal with it."

Obtaining a concealed carry permit in Alabama right now requires the gun owner to undergo a background check that will reveal any past arrests, documented mental illness or sexual abuse. But maybe most importantly for law enforcement, the permit is a tool to keep track of who is and isn't allowed to carry a firearm.

"My agency alone, we turned down over 490 people that applied to get a permit," Cunningham said. "Their background came back bad, or they have mental conditions or whatever the case may be. We turned them down because they weren't qualified to carry. Now, that process is gone."

"I think the general public is still going to look at it as their responsibility," he said. "We don't think it's going to be the wild West and everyone's running around with guns on their hip. It's just, you know, more security in the Second Amendment for private citizens."

Rastok says he has seen the number of participants in their LTC classes go down since the Texas law passed in September, but many are still seeking training.

Despite the 20-plus states that have passed this kind of legislation, its popularity is a recent phenomenon.

Before 2011, Vermont was the only state that did not require a permit to carry concealed weapons. Fast-forward 10 years, and six states passed permitless carry laws in 2021 alone.

Similar to Alabama, law enforcement in Texas spoke out against the law before it was passed, and a statewide poll by the Dallas Morning News showed a majority (58%) of Texans were opposed to permitless carry of handguns.

But the law moved forward anyway, with some political analysts in Texas saying threats of primary challenges from the far right helped push reticent Republicans to pass the measure.

In a signing ceremony in San Antonio that included the president of the NRA, Texas Gov. Greg Abbott said the new law would help law-abiding citizens protect themselves.

For Cunningham, who like many officers is dealing with a two-year surge in gun violence, the law is just another challenge for an already challenging job.

"You got guys and girls are coming to work every single day, and their families want them to come home," he said. "And really with this bill, we're putting the odds against some of these young people."