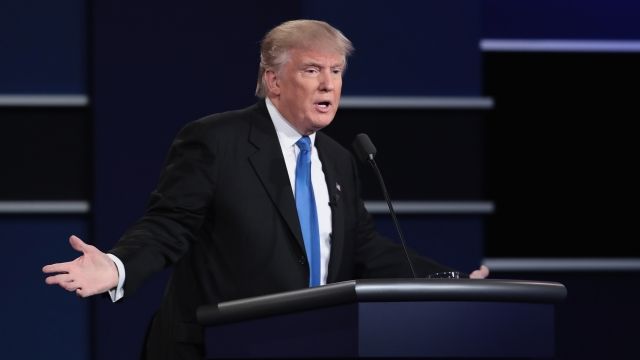 In what is quite possibly the shortest statement ever, the Commission on Presidential Debates confirmed Friday that there were issues with Trump's audio in the debate hall. But it didn't offer any specifics — and didn't address a comment Trump made Tuesday morning.

"I wonder, was it set up that way on purpose?" he said Tuesday on "Fox & Friends."

Trump first told reporters about his microphone issue in the spin room following Monday's debate. He also seemed to sniffle during the debate, which led to video compilations online. He told "Fox & Friends" the next morning he never sniffled. Rather, he blamed the repeated sniffling sound on a bad microphone.

As of Friday afternoon, Trump had not commented on the commission's admission. And neither had Hillary Clinton, who responded to Trump's comment the day after the debate.

"Anybody who complains about the microphone is not having a good night," Clinton told reporters aboard her campaign plane.