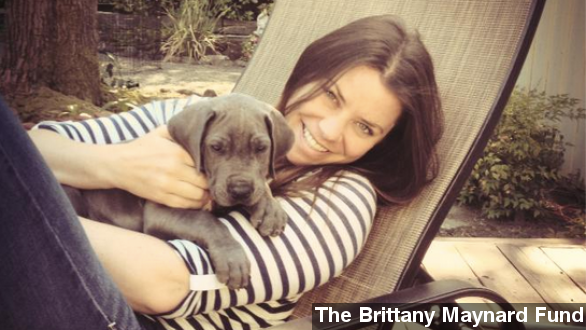 Brittany Maynard knows when, where, and how she's going to die.

BRITTANY MAYNARD VIA YOUTUBE / COMPASSIONCHOICES: "I will die upstairs in my bedroom that I share with my husband... with my mother and my husband by my side."

She has stage 4 gliobastoma, a very aggressive form of brain cancer.

People first reported on 29-year-old Maynard, who, after being terminally diagnosed with that malignant brain tumor, decided to end her own life.

Supporters call the practice "death with dignity," and it's only legal in five states. Which is why Maynard and her husband moved from California to Oregon.

Under the state's 1997 Death with Dignity Act, a person is allowed to end his or her life through self-administered lethal medication provided that person is 18 years or older, a resident of Oregon, capable of making and communicating health care decisions for him or herself, and has been diagnosed with a terminal illness that will lead to death within six months.

By creating the Brittany Maynard Fund, Maynard hopes her case will help make the practice accessible in more states. But it is a controversial debate.

ALAN DERSHOWITZ VIA CNN: "This is an issue whose time is coming, and I think soon we will see more and more states accept the right to die. But it's difficult."

PETER WOLFGANG VIA AL JAZEERA: "Our deepest sympathy to Brittany at this time. But this is assisted suicide. These terms 'aided dying,' 'death with dignity,' they're not recognized by the legal community, by the medical community."

But here's what makes Oregon different from other famous cases of so-called assisted suicide. As Carmen St. George told HLN, it's the requirement of self-administration.

CARMEN ST GEORGE VIA HLN: "I think the courts would look at it differently when it's the individual for whom this responsibility lies. And ultimately it's her own life."

By contrast, before Dr. Jack Kevorkian was convicted of second-degree homicide, he himself administered lethal injections after being given fully informed consent from his patients. (Video via CBS)

There are no legal hurdles for Maynard herself. She has planned her death for Nov. 1, six days after her husband's birthday. She plans to record a video testimony for California lawmakers before then.

This video contains images from The Brittany Maynard Fund and Getty Images.