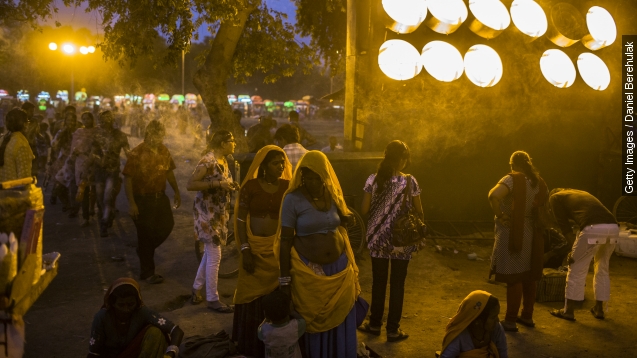 As of Tuesday, more than 2,300 people have reportedly died from the heatwave stretching across India.

As of Tuesday, more than 2,300 people in India have died due to extreme heat.

The southern Indian state of Andra Pradesh has been the most effected, where CNN reports the death toll now totals more than 1,700; 42 of whom have died in just the past 24 hours. (Video via News7 Tamil)

And almost 600 have died in the neighboring state of Telangana.

The Indian Express reported that after the government announced relatives of heatwave victims would receive 100,000 rupees, or just over $1,570, the number of deaths being reported increased. (Video via IndiaTV)

The Wall Street Journal reports Andhra Pradesh's government is warning citizens to drinks lots of water and use an umbrella and keep their heads and bodies covered if they need to go outside.

As USA Today reports, a decent portion of the population are wage workers and can't afford to stop working and stay home.

With the death toll climbing, this is now the deadliest heat wave in India ever.

1998, when just over 2,500 people died, marked the country's second deadliest. The deadliest heat wave in the world occurred in 2003 when more than 71,000 people died across Europe.

Now, India usually sees its hottest months from April through the end of May before monsoon season strikes in the beginning of June.

Relief from the heat is expected to come Friday, when forecasters predict monsoon rains will hit India, which is later than most years.