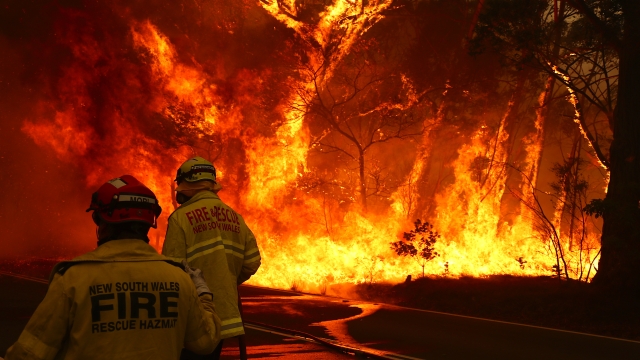 As dozens of fires continue to burn across Australia, Sydney's New Year's Eve fireworks show went off as planned after the New South Wales Rural Fire Service allowed the city to be exempt from a fire ban.

Hundreds of thousands of people had signed a petition to cancel the show and instead use the millions of dollars to support firefighters or those affected by the fires.

Tens of thousands of people have been forced to flee their homes, with many seeking shelter in parking lots and sleeping in their cars. BBC reports at least 18 people have died, including civilians and firefighters.

Volunteer firefighter Samuel McPaul died on Monday when the truck he was in rolled over in high winds. Two other firefighters were also injured in the incident.

"They described it as an extraordinary wind event ... that's resulted in cyclonic-type winds that has moved across the fire ground and has literally lifted up a 10- or 12-ton firetruck and flipped it onto its roof, trapping the people inside, and tragically killing Sam in the process," fire commissioner Shane Fitzsimmons said.

The Australian military is deploying ships with aid to some coastal areas that have been devastated by the fires. The Australian Defense Force is also sending in helicopters to help thousands of residents stranded because of inaccessible roads.

Sydney's mayor defended the decision to go ahead with the fireworks show. She said at a press conference before the event that it would "give hope to people at a terrible time."