More than 400 Dead And 1,400 Injured After Tsunami Hits Indonesia 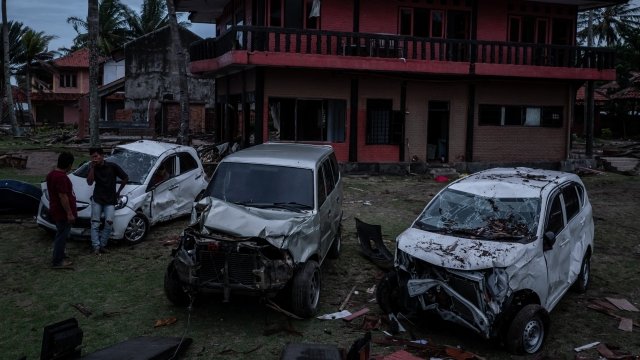 SMS
More than 400 Dead And 1,400 Injured After Tsunami Hits Indonesia
By Audrey Esther
By Audrey Esther
December 25, 2018
Over 400 are dead, around 1,400 injured and many are still missing days after a tsunami hit parts of Indonesia's Java and Sumatra regions.
SHOW TRANSCRIPT

So far, at least 420 people are confirmed dead and 1,400 injured after a tsunami hit Indonesia on Saturday.

As of Tuesday afternoon, 154 people were also reported missing.

Adding to the human cost of the disaster is the property damage: More than 16,000 people are displaced and over 800 homes destroyed, according to the country's National Disaster Mitigation Agency.

Officials believe a volcanic eruption triggered an underwater landslide during a high tide, which then caused the tsunami's monster wave.

Authorities have warned residents more tsunamis could soon strike because of the undersea volcano's high activity.