Death Toll At Collapsed Condo Near Miami Rises To 9 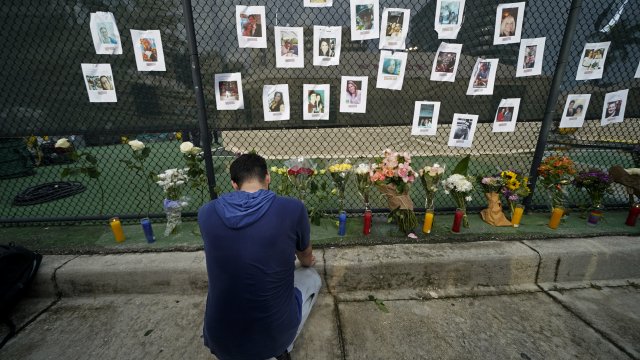 The death toll at the site of a collapsed 12-story oceanfront condo near Miami has reached nine.

On Sunday, Miami-Dade's mayor said one victim died in the hospital as rescue crews recovered more bodies from the rubble. There are still more than 150 people unaccounted for. Crews

Crews are racing to rescue any survivors after fighting back fire and smoke deep inside the concrete and metal remains.

Miami-Dade Mayor Daniella Levine Cava said: "We're cutting a deep trench to assist us ... Now this trench is very critical to the continuation of the search and rescue process. We've continued all night to build that trench and as a result of that, we were able to recover four additional bodies in the rubble, as well as additional human remains."

According to documents released by the city, the ground-floor pool deck of the condo building was resting on a concrete slab that had "major structural damage." That 2018 engineering report also uncovered "abundant cracking and spalling" of concrete columns, beams and walls in the parking garage.

The report did not warn of imminent danger, but it did note the need for extensive repairs costing more than $9 million. It's unclear whether any of the damage observed was responsible for the Champlain Towers South collapse.