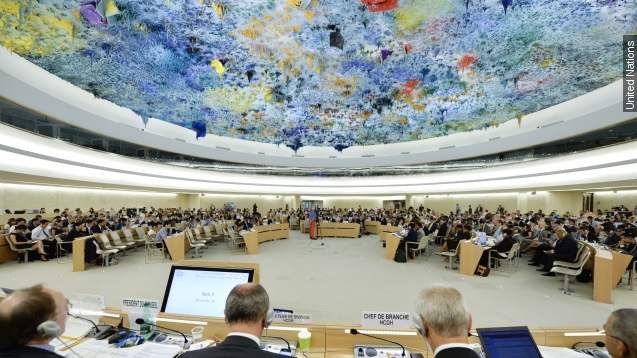 SMS
Death Penalty Won't Exclude You From UN Human Rights Council
By Kate Grumke
By Kate Grumke
October 5, 2015
Many call Saudi Arabia hypocritical for its UNHRC membership and its executions, but other countries on the council also use the death penalty.
SHOW TRANSCRIPT

Saudi Arabia is well known for its brutal censorship and oppression of women, but its state-sponsored executions are what people point to the most when arguing it doesn't deserve a spot on the U.N. Human Rights Council. (Video via Kingdom of Saudi Arabia)

But the kingdom isn't the only country on the council that still carries out state executions.

Human rights advocates have long focused on the death penalty as a global human rights issue, and in the past 20 years, the number of countries carrying out executions has dropped almost by half, from 41 countries in 1995 to 22 in 2014.

Notably, of the 22 countries that carried out executions in 2014, the U.S. is the only country in the Americas, and it is the only country that's also part of the G7 group of advanced economies, including the EU, which includes abolishing the death penalty as a prerequisite for membership.

And globally, three of the top five countries with the most executions in 2014 are on the council. Those are China, Saudi Arabia and the U.S.

So considering that the U.N.'s own secretary general says this:

"The death penalty has no place in the 21st century," Ban Ki-moon said.

It's especially eyebrow-raising that the U.N. Human Rights Council values the opinions of these countries so heavily.