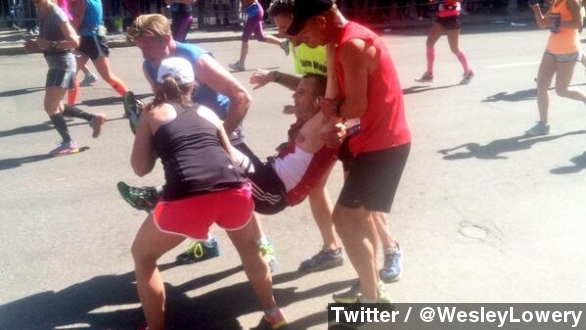 By Christian Bryant
April 22, 2014
Several media outlets reported that a man was carried across the finish line by other runners when he actually finished the marathon on his own feet.
SHOW TRANSCRIPT

There was no shortage of inspirational and heartfelt stories coming out of this year's Boston Marathon.

Take for example Heather Abbott, who lost her leg as a result of last year's bombing but crossed the finish line this year on her newly-fitted prosthetic running leg. (Via NECN)

Or how about Meb Keflezighi? The 38-year-old runner is the first American to win the race in 30 years. Not only is he a decade older than the median age of past Boston Marathon winners, he broke his hip during a race in 2008, yet he's still rolling. (Via The Boston Globe)

But at least one story didn't happen quite the way some outlets reported it. Washington Post reporter Wesley Lowery tweeted pictures of a man, who had collapsed near the finish line, being carried by other participants.

One of the captions reads, "He had just a few hundred feet to go. They would get him there." ​(Via Twitter / @WesleyLowery)

While several headlines told the story of that runner being physically carried across the finish line, a Deadspin article sought to set the record straight, saying in its lede, "Too bad it didn't really happen that way."

The article is accompanied by a video which shows the collapsed runner actually finishing on his own two feet. The writer speaks critically of the media, saying it "went with the more inspirational story ... Time and again, media outlets report these elevating narratives, only to eventually learn they aren't actually true."

The writer calls reporters chasing the more inspirational angle in stories a "recurring theme" and points to the case of Manti Te'o — an NFL player profiled for his inspirational performance after the death of his girlfriend. It was later revealed that girlfriend never existed. (Via ESPN)

The Boston Marathon runner who collapsed at mile 26 was briefly carried by several other runners but was put back on his feet and finished alongside the other participants. So does that misreported fact diminish the story?

We'll leave that up to you to decide, but Lowery defended himself on Twitter saying he never claimed the runner was carried across finish line.

And in a follow-up article filed after the Deadspin story was published, Lowery wrote the act of runners helping each other is one of the biggest takeaway from this year. He wrote in part, "It will be the image of these four strangers banding together, to carry one of their own, that will symbolize the message of the 118th marathon." (Via The Washington Post)