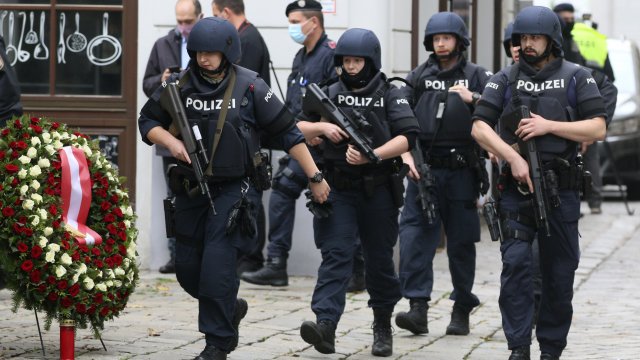 Austrian officials are calling Monday's shooting spree in Vienna, which left at least four people dead and 22 others wounded, an "Islamist terrorist attack."

Police killed a gunman on the scene and identified him as an Islamic State "sympathizer" who spent time in prison for trying to join ISIS in Syria.

The Islamic State claimed responsibility for the attack on Tuesday, but it's unclear whether it actually played a role in it.

Austrian Chancellor Sebastian Kurz warned his nation against creating divisions in the wake of the attack.

"Our society is united, and we all know in our country that this is not a fight between Christians or Muslims or Austrians and people from other countries," Kurz said.

Monday's assault comes after a series of deadly terror attacks in France amid renewed controversy over cartoons of the prophet Muhammad.

The violence has prompted countries across Europe to increase security alerts.

Several leaders are calling for a collective plan to fight terrorism and prevent the radicalization of young Europeans.

"We will do anything as Europeans to stick together and fight this plague and move forward without ceding on any of our values," France's President Emmanuel Macron said.

The Austrian government has announced a three-day period of official mourning. It's also urging Vienna residents to stay at home until the possibility of another attacker is ruled out.