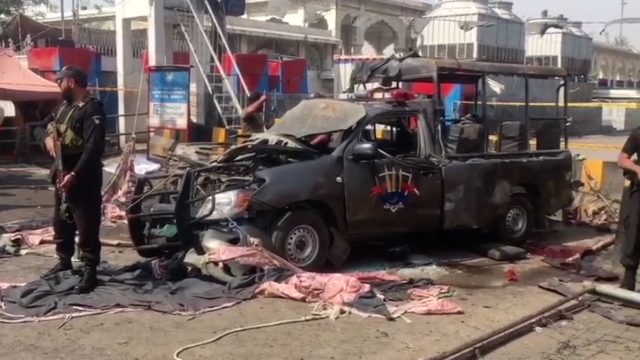 The attack on the second day of Ramadan occurs at one of Pakistan's largest Muslim centers.

At least 10 people are dead and nearly a dozen injured in a suicide bombing near a major Sufi shrine in Pakistan.

The attack took place outside of the Data Darbar shrine in Lahore— it's one of the largest Muslim shrines in South Asia. Officials say they believe a police van was the target of the bombing, adding that eight of the dead are police officers. Police were stationed as security outside the shrine at the time of the attack.

A splinter group of the Pakistani Taliban claimed responsibility for the attack. But officials haven't confirmed who carried out the bombing.

Pakistan Prime Minister Imran Khan says he strongly condemns the attack and has asked the government to assist injured people and families of victims.

The attack took place on the second day of Ramadan — a holy month in which Muslims fast from sunup to sunset.

Data Darbar was attacked back in 2010, killing 42 people and injuring 175. The Pakistani Taliban was believed to have been behind that attack.