At Least 10 Dead, 180 Injured As Protests Turn Violent in Sudan 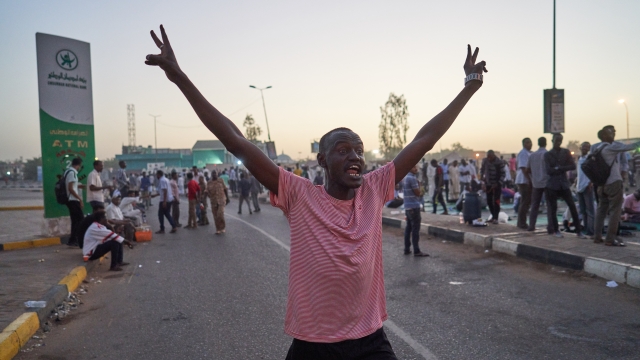 SMS
At Least 10 Dead, 180 Injured As Protests Turn Violent in Sudan
By Caitlin Baldwin
By Caitlin Baldwin
July 1, 2019
Protesters, numbering in tens of thousands, have been calling for the army to hand control over to a civilian government for months.
SHOW TRANSCRIPT

At least ten people are dead as mass protests continue in Sudan. The country's health ministry says more than 180 people are injured, some from gunshot wounds.

Tens of thousands of people lined the streets Sunday, demanding the end of military rule - despite a heavy presence of armed security forces. Three bodies with bullet wounds were discovered on Monday, according to Al Jazeera.  Security forces closed off roads to deter protesters and used tear gas on large crowds.

The protests started in December after the government cut subsidies on fuel, bread and other staples. They transitioned into calls for the longtime president, Omar al-Bashir, to step down. In April, al-Bashir was ousted in a military coup and the Sudanese Army took control of the government.

A compromise was struck in May between the military and civilian protest leaders. They agreed to transition back to civilian rule after a three-year period.

But protesters called for a quicker transition and staged a sit-in outside the military headquarters in June. Security forces launched a raid on the protest camp, killing more than 100 people and injuring hundreds more.

Sudan's military leader canceled the agreement between the military and protest leaders just one day after the raids. He called for snap elections to be held within nine months. But protesters argue the offer may be a ruse to keep the military in power.