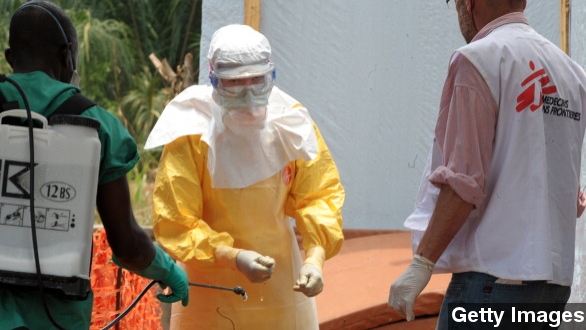 By Madison Burke
July 26, 2014
A Liberian man died from the virus in Lagos, Nigeria. Ebola is highly contagious and has sparked health scares across parts of central Africa.
SHOW TRANSCRIPT

Health officials have confirmed the first case of Ebola in Nigeria.

Euronews reports a Liberian man died from the virus in the heavily populated Nigerian city of Lagos.

Ebola is highly contagious and is passed through bodily fluids. It causes a painful fever along with internal and external bleeding. There is no known cure, and the illness often results in death. (Via BBC)

Almost 700 people have already died in the countries of Guinea, Liberia and Sierra Leone since an outbreak of the virus was discovered in February. (Via Mashable)

Experts call the rate at which the disease is spreading alarming and blame the outbreak on weak heath care systems.

DR. PETER PIOT: "What we can do in theory is very simple. Use soap and gloves...don't reuse injections."

And the disease's prevalence in heavily populated cities hasn't helped.

Doctors Without Borders issued this statement last month saying the situation was "out of control" and "We have reached our limit."

Time reports Nigerian health officials are asking residents to, “remain calm and take appropriate measures for the prevention and control of the disease.”

According to the BBC, the country is now "on red alert" and notes that Lagos is the most populated city in all of Africa.

Nigreria has posted health officials to all entry points into the country in hopes of containing the disease.