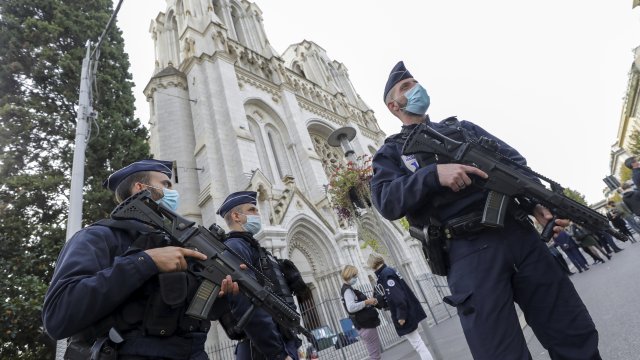 French officials are calling Thursday’s killing of three people at a church in southern France an act of Islamist terrorism — as the nation faces a violent backlash against caricatures of the Prophet Muhammad.

Before the latest attack, French President Emmanuel Macron defended the right of the satirical magazine Charlie Hebdo to publish the cartoon.

"We won't renounce the caricatures," Macron said last week, paying tribute to a teacher who was recently beheaded after showing his class the same cartoons of the prophet that motivated the 2015 attacks against Charlie Hebdo.

The French president has also unveiled a plan to root out Islamist "separatism" from his nation, saying the religion "is in crisis" and in need of enlightenment.

But while Macron's actions have broad public support at home, they have also ignited a fierce reaction in Muslim countries across the world.

"The birthday of the prophet is coming up. And so there's that kind of sensibility there," said Amir Hussain, a scholar of Islam who teaches at Loyola Marymount University in Los Angeles.

He says caricatures of Prophet Muhammad should be protected by free speech but are highly offensive to millions nonetheless.

Led by Turkish President Erdogan, leaders of several Muslim countries have called for a boycott of French goods though they also condemned Thursday's killings.

Experts note that some of the political anger is self-serving.

As the attacks continue, the efforts to get France to change course through economic pressure are running up against public grief and anger over the killings.

France is now on its highest state of terror alert — with the Prime Minister promising a "firm and relentless" response to the violence.