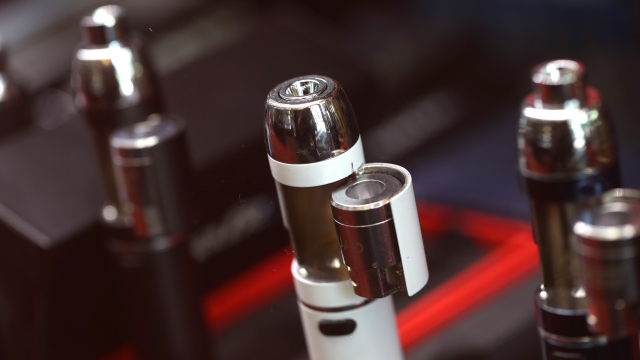 SMS
DEA Will Accept Vape Products On National Drug Take Back Day
By Ahmed Jawadi
By Ahmed Jawadi
October 25, 2019
​The DEA said it's adding the products due to concerns over high vaping rates among young people, as well as the growing vaping injury epidemic.
SHOW TRANSCRIPT

The Drug Enforcement Administration will, for the first time, accept vaping products for National Prescription Drug Take Back Day.

The DEA said people who want to get rid of their vaping devices and cartridges can now do so during the nationwide event on Saturday, Oct. 26. Collection sites will be open between 10 a.m. and 2 p.m. local time.

The agency notes, though, that vaping devices containing lithium ion batteries will not be accepted. If batteries cannot be removed from the device, the agency recommends people check with large electronic chain stores or their local hazardous materials management facility about proper disposal.

The semiannual event allows people to anonymously drop off expired or unwanted prescription pills at collection sites across the U.S. free of charge. The agency says it has collected more than 11 million pounds of prescription drugs since the program's inception back in 2010. It says the effort helps "provide an opportunity for Americans to prevent drug addiction and overdose deaths."

The DEA said it's adding the products due to concerns over high vaping rates among young people, as well as the growing vaping-related illness epidemic that's left thousands injured and dozens dead. The CDC says it has received more than 1,600 reports of "confirmed and probable lung injury cases associated with use of e-cigarette, or vaping, products" across 49 states so far. Thirty-five vaping-related deaths have also been confirmed, with the latest one happening in Washington, D.C. Health officials are still investigating what exactly is causing these injuries.