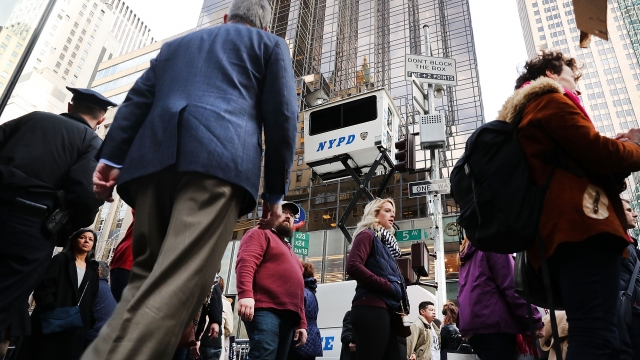 "We will be asking for up to $35 million," New York City Mayor Bill de Blasio said Monday.

That's apparently how much it's costing New York City to provide security around Trump Tower.

De Blasio sent a letter to Congress and President Obama asking the federal government for that massive reimbursement.

The $35 million request is just for security costs from Nov. 8 to Inauguration Day on Jan. 20.

You might be wondering why the cost is so high when the Secret Service is charged with protecting Trump and his family. Well, it's a team effort.

As the letter points out, New York Police Department officers not only work to protect Trump, but also the thousands of people who live and work in Trump Tower. Trump Tower is located in a very busy and popular part of Manhattan, and that makes the job even more difficult.

And since NYPD doesn't want to decrease the number of officers policing other parts of the city, it has to pay officers overtime to provide additional coverage at Trump Tower.

"I remain hopeful because when you look at the history of how the federal government has handled a number of other situations where NYPD has provided extraordinary efforts ... there's actually a pretty good track record on reimbursement," de Blasio told reporters at a press conference Monday.

This is likely just the first of multiple reimbursement requests. Melania and Barron Trump will continue to live in Trump Tower until at least the end of the school year. And the president-elect will likely make some trips back to New York once he makes the move to the White House.

De Blasio also told reporters he had spoken with Trump's pick for treasury secretary, Steven Mnuchin, who is also a New Yorker. He said they had a "good conversation, including the fact that he totally understood there was a real important discussion to be had on how we deal with reimbursement issues going forward."