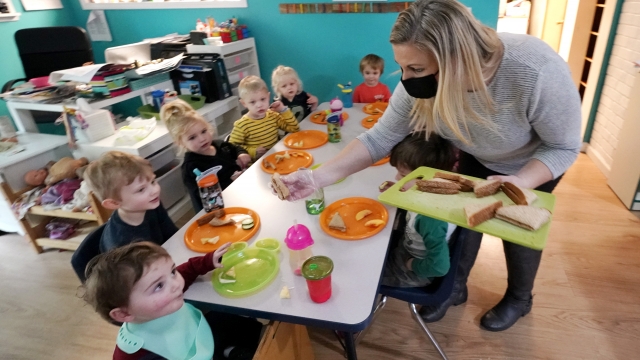 SMS
High Inflation Rates Are Making Child Care Costs Rise
By Meg Hilling
By Meg Hilling
May 2, 2022
Parents are feeling not only the rising costs of housing, feeding and clothing their families but also the inflation bite of higher day care bills.

For Kentucky working mother Kaelyn Query, the monthly bill for child care for her son is more than $800 a month.

"It's a lot of money when you're talking about one parent paying for something," she said. "But it's, again, a necessity. I don't have the ability, with what I do, to keep him during the day."

Across the country, parents are feeling not only the rising costs of housing, feeding and clothing their families but also the inflation bite of higher day care bills.

"We heard that it's not uncommon that childcare on a month-by-month basis exceeds mortgage payments. So, a real challenge that so many families are having to address," United WE President Wendy Doyle said.

The advocacy group Child Care Aware says that in more than half the states, full-time care for an infant now costs more than college tuition. For single parents, the burden is especially heavy.

The most expensive state for single parents was Massachusetts with care for a 4-year-old taking up about half of the median income. Michigan and New York followed.

A lack of workers is behind some of the inflationary pressures causing day care operators to raise prices around Tampa - St. Petersburg area. The labor shortage is forcing some agencies to take fewer children.

"About 40% of our providers have a waiting list due to staffing shortages so that represents 300, 400 providers throughout Pinellas County," Early Learning Coalition of Pinellas County CEO Lindsay Carson said.

In the Kansas City area, day care owner Jessica Combs says inflation is being felt in her operating expenses.

"I, unfortunately, just had to raise my rates a little bit because everything is just getting so costly," she said. "Like, we just got our utility bills, and I was stunned at how much it has gone up since last year."

Combs cares for children in her home and says after paying her costs she barely makes minimum wage.

"I'm not actually getting rich by any means," she said. "I wish!"

Wilson found it was actually less expensive to stay home than to work and send her kids to day care.

"How am I going to find a job that's going to be able to pay that… and still pay my bills. Worry about food… anything that my kids need… anything that the house needs. There's no way that I could swing that," Wilson said.

For families, staying home is not uncommon. That could mean less income and a disruption of the career of the wage earners — usually the woman's.

"When women step out of the work force, it creates a divide in pay between men and women, leading to more inequalities — particularly when women want to enter the workplace," Doyle said.