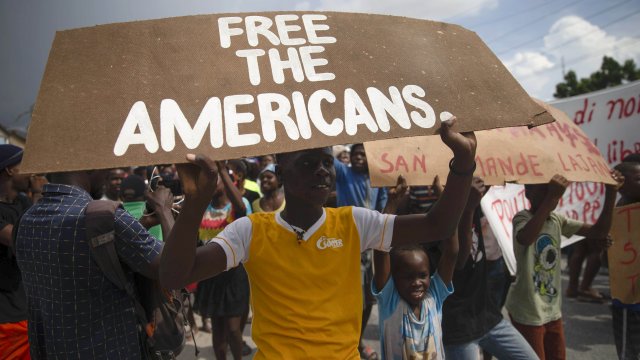 Day five of the Haiti kidnapping crisis — with 17 lives hanging in the balance.

In a village near the kidnapping scene, Haitians are calling for the release of the missionaries.

"Because of them, we can do everything. They built our schools, they pay our bills. They do everything for us. So, now we can't do anything because they kidnapped them," protester Zachary Celus said.

Nearby, the streets of Haiti's normally bustling capital are deserted — political unrest, a labor strike and fear of out-of-control crime keeping Haitians locked up in their homes.

"Nobody is safe," said Port-au-Prince resident Jermain Carl Henry. "Even normal people going out to buy food get kidnapped. It's even worse for someone in a car. There is so much fear in the country, even people living outside the country are afraid to come back."

The U.S. State Department, along with the FBI, is leading the effort to free the group of missionaries — 16 Americans, including five children, and one Canadian — now being held by the 400 Mawozo street gang.

"Kidnapping is widespread and victims regularly include U.S. citizens," Psaki said. "We know these groups target U.S. citizens, who they assume have the resources and finances to pay ransoms, even if that is not the case."

Any attempt to rescue a group of hostages that large would be enormously risky, and paying the $1 million-per-captive ransom could set a dangerous precedent.

"It would be very unfortunate for the $17 million to be paid because that would only reinforce the gang and only finance further kidnappings," said former Haitian Prime Minister Laurent Lamothe.

In a new statement, Ohio-based Christian Aid Ministries said, "Many people, including CAM management and Haitian and U.S. authorities, are working diligently to bring our loved ones home safely."

Haiti's justice minister says talks are underway with the kidnappers to free the missionaries.