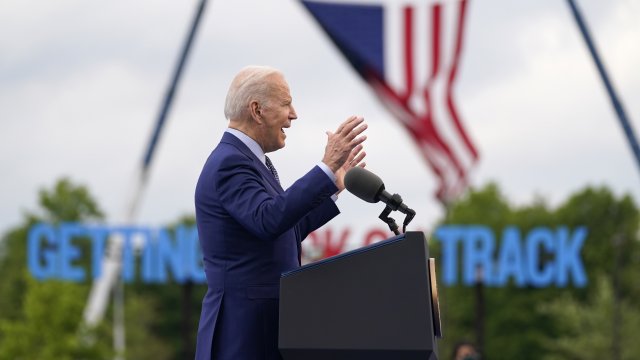 Back on the road.

Members of the Biden administration are hitting the road again today to sell their infrastructure and families plans.

Today's focus is on transportation improvements proposed in the American Jobs Plan.

President Biden and the first lady will attend an Amtrak 50th-anniversary celebration in Philadelphia.

Vice President Harris is traveling to Cincinnati, while the second gentleman and Transportation Secretary Pete Buttigieg will be in Raleigh, North Carolina.

The tour continues next week with the president and first lady visiting Yorktown, Virginia, and the vice president traveling to Milwaukee.

The tour kicked off yesterday with the president and first lady visiting Atlanta on the president's 100th day in office.

"As much as we've done, we've got a lot more to do. That's why I proposed the American Jobs Plan. ... It is a once-in-a-generation investment in America. It's the biggest jobs plan in this country since World War II."

During his trip, President Biden spoke on the phone with Republican Sen. Shelley Moore Capito.

Capito spearheaded the GOP's $568 billion counter-proposal to the president's over $2  trillion-dollar infrastructure plan and met with President Biden in February.

The White House says the president and senator had "a warm, ... friendly conversation" and reiterated "their willingness to negotiate."

They also talked about meeting again -- in person -- in the near future.