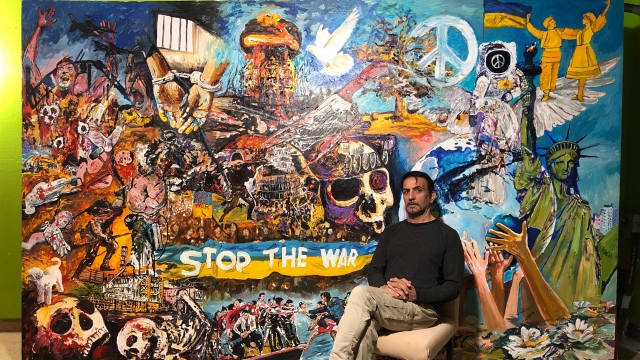 The horror of war is no stranger to Davood Roostaei.

"I paint me when I was in Iran and do the graffiti against the war," he said.

An Iranian refugee amid the war with Iraq in the '80s, he knows what it is to leave your whole world behind for the promise of safety and prosperity.

"I wish nobody, nobody in this world really experience the war," Roostaei said.

NEWSY'S JAMES PACKARD: You did graffiti, which got you in jail.

DAVOOD ROOSTAEI: Exactly. And I related my time when I was in jail with the people now in Ukraine.

For decades, his art has revealed layers of a complicated man made sensitive and nurturing amid the turmoil of war.

"You know, when I paint, I forget the time and place and everything," Roostaei said.

He slathers brilliant colors across the tight fabric of his canvas with only his fingers. It's a technique he adopted 40 years ago, ditching the paintbrush and never looking back.

"I can better put my energy and my perspective to my artworks," he said.

It's a building block to a technique called cryptorealism, which is an approach he created and for which he is world-renowned.

He's attracted the likes of Hillary Clinton and Paul McCartney. His paintings have sold for hundreds of thousands of dollars.

ROOSTAEI: More and more, I respect all of their creations.

PACKARD: Do you think those lessons are also true for the collectors who have purchased your pieces because these are some of the most wealthy and powerful people in the world, people who can make peace if they want to? Do they feel those lessons, too?

ROOSTAEI: Some of them for sure, because the people that they love the art, they are more sensitive and more deeper maybe than the others, and they look from different perspective at everything.

Each layer of his work builds a new image — a new way to see the world he depicts.

"Cryptorealism is an expression of hidden meaning through layers, imagery, which requires active participation by the observer," Roostaei said.

His home is filled with images of a colorful, painful, joyful life — layers of their artist.

"Sometimes I must go to the canvas with my colors and explain heart and my experience to the others," he said.

Rostaei's steely exterior belies his thoughtful eyes and his tender heart, shaped — like the images he paints — by a deep conviction that every scene of life is subject to interpretation, to the beholder's willingness to see the beauty or the pain, the peace or the war.

PACKARD: What takeaway is there for that in life? You know, if someone comes in, has a relationship with your painting, that's entirely different from the person standing next to them.

ROOSTAEI: I want people more look at the inside of everything, you know. See the other perspectives.

One piece is expected to sell for $700,000 to $1 million, all of which will benefit relief efforts in Ukraine.

"The children of the future. They don't want to be born in this problematic world," Roostaei said.

A tableau for peace, crafted by hands layered with the story of a refugee who found peace in bearing witness to the profound beauty all around us and the power it has to change us.

PACKARD: If I were to just ask you: Who is Davood Roostaei? What would you say?

ROOSTAEI: He loves all the human beings, all the nature. He loves Mother Earth. He donated all his creations, paintings to the peace, to the better world, to the better and safe future for children.