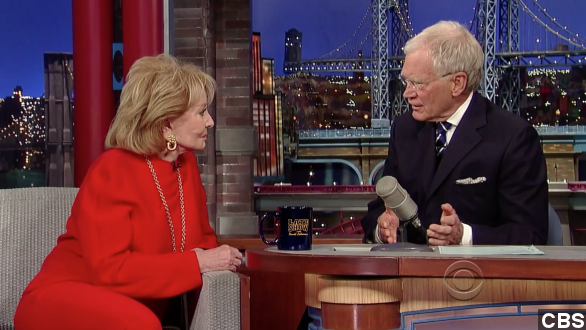 SMS
Letterman Tells Walters He Regrets Treatment Of Lewinsky
May 15, 2014
On the 'Late Show,' David Letterman and Barbara Walters got retrospective as they look to retirement, and Letterman revealed a big regret.
SHOW TRANSCRIPT

One last meeting of two media titans. Wednesday night Barbara Walters was a guest on the "Late Show." With both she and David Letterman on the verge of retirement, it was quite a retrospective conversation — and Letterman revealed a regret.

Monica Lewinsky's recent article in Vanity Fair came up, because, of course...

Walters famously interviewed her after her 1990s affair scandal with President Bill Clinton. (Via ABC)

“I started to feel bad because myself and other people with shows like this made relentless jokes."

“I feel bad about my role in helping push the humiliation to the point of suffocation.”

In her article, Lewinsky talks about the pain of the constant media critique and ridicule she underwent during the scandal. Since then, she hasn't been able to leave it behind — she even gets rejected for jobs.

The Washington Post dubbed Walters' and Letterman's conversation "...fascinating, as the way it only can [be] between two people who have been in the business as long as they have."

Letterman even compared the scandal to the recent viral video of Solange Knowles seemingly attacking Jay Z. He wondered if it was fair to make jokes because the three are famous, or if it needed to be recognized as a "sad human situation." (Via TMZ)

Letterman also said he felt particulary bad because Lewinsky was so young at the time, in her early 20s, as he put it "just a kid." Kind to say, maybe, but Walters pointed out she had never heard Lewinsky use her young age as an excuse.

As for Lewinsky's job status, Letterman asked if Walters had ever offered her a position on "The View." The longtime host wouldn't get into details, but said there'd been an opportunity, but it isn't the type of job Lewinsky wants.

Walters' last day on "The View" is this week.