David Fincher Wants Christian Bale As Steve Jobs Or Else 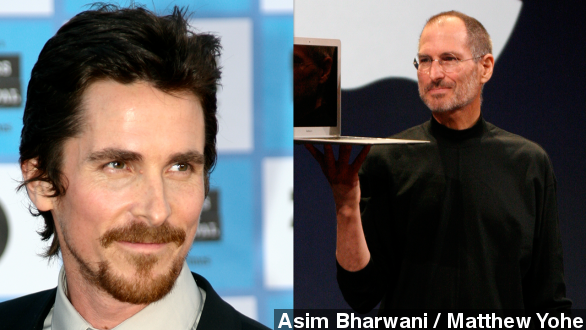 By Adam Falk
March 21, 2014
Christian Bale might play Steve Jobs in the upcoming Aaron Sorkin-written biopic. That is, if Sony wants David Fincher to direct it.
SHOW TRANSCRIPT

Christian Bale is reportedly the "first choice" to play Steve Jobs in the Aaron Sorkin-written, David Fincher-directed biopic. Wow, can we fit more A-listers in one sentence?

The news comes from The Wrap, which cites an "individual familiar with the project." It goes on, reporting Fincher met with Sony Studio's co-chair Amy Pascal and said "in no uncertain terms, that he'd only take the reins of the project if Bale plays Jobs."

Assuming that's true, that shows a lot of confidence in the former Batman.

Pascal reportedly worked with Bale promoting his latest film, "American Hustle," for which he received an Oscar nod. (Via Hollywood.com)

But Bale has not yet been approached about the project, according to Cinema Blend. Sony has also not commented on the news.

Rumors of Bale as Jobs have been circling for a while now, simply because the Oscar-winning actor kind of looks like the Father of the iPhone – minus the turtleneck, of course. (Via YouTube / chuckthemovieguy, Apple)

And even if you don't see a resemblance, Bale has been known to make some extreme changes for previous roles.

Consider his all-natural gut in "American Hustle," how thin he was in "The Fighter" and his awkward voice change as Batman.

Mashable says there is a downside here. "Bale is said to be taking a break from acting after a long shoot playing Moses on Ridley Scott's 'Exodus.'"

But at this point, there is no reason to think Bale wouldn't at least consider the gig. I mean, wouldn't you?

If he doesn't want it, I bet Ashton Kutcher might like a retry. Yeah, maybe a different route, Sony. (Via Open Road Films / "Jobs")