David Cameron Has No Intention Of Paying $2.7B Bill To E.U. 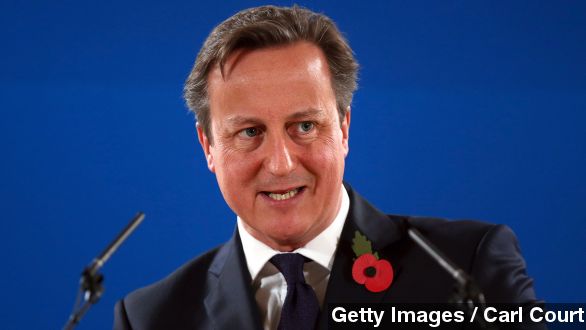 SMS
David Cameron Has No Intention Of Paying $2.7B Bill To E.U.
By Jake Godin
By Jake Godin
October 24, 2014
Leaked documents indicate the U.K. and many other European countries will be expected to pay whopping bills after recalculations of what they owe.
SHOW TRANSCRIPT

If you've ever gotten a utility or phone bill that was way more than you'd expected, well, David Cameron probably has you beat.

The United Kingdom's prime minister found out Friday his country might have to pay the European Union a whopping $2.7 billion by Dec. 1. His reaction was pretty much what you'd expect.

DAVID CAMERON VIA BBC: "It is not acceptable; it is an appalling way to behave. I'm not paying that bill on 1 December. If people think I am, they got another thing coming. It is not going to happen."

Leaked documents provided by The Financial Times revealed the number, which is the result of a recalculation of how much each E.U. member-state owes using data from as far back as 1995. Those who made more than expected need to pay. Those who made less get rebates instead.

Other countries expected to pay hefty bills include the Netherlands at $813 million and Italy with $430 million. Even Greece, which has gone through economic turmoil, owes nearly $115 million.

On the opposite end of the spectrum, some countries are getting rebates, including France at $1.2 billion and Germany with $986 million. These numbers might change, though, because they're currently estimates.

But even so, how exactly does a country rack up a $2.7 billion bill estimate? A BBC economics writer offered a somewhat tongue-in-cheek explanation, saying:

"Well you may recall that the Office for National Statistics recently recalculated the size of our national income to take account of unreported or under-reported parts of the economy, such as research and development, illicit drugs and prostitution.

"So thanks in part to the inclusion in the official economy of our productive sex workers, our EU membership fee has been augmented."

And while Euro-watchers say Cameron is already rallying the support of others stuck with steep bills, Finland's Prime Minister Alexander Stubb reminded everyone the E.U. is a complex organization.

ALEXANDER STUBB VIA EURACTIVE.COM: "It's very important we don't start treating the European Union as some kind of simplified accounting exercise. ... Sometimes I think we make mountains out of molehills."

Of course, whether refusing pay a huge bill like the U.K.'s is making a mountain out of a molehill depends on whom you ask — Euroskeptics, for instance, could use it as ammo for calls for the country to leave the E.U.

Leading that charge is Nigel Farage, head of the U.K. Independent Party. He was quick to comment on the bill, saying Cameron was in a "hopeless position" when it comes to his nation's contributions to the E.U.

To calm Euroskeptics who support politicians like Farage, last year Cameron promised a 2017 "in/out" referendum on whether or not the U.K. will remain in the E.U.