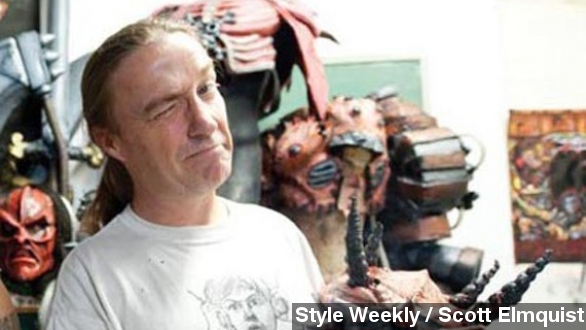 By Matt Picht
March 24, 2014
David Brockie, who performed as Oderus Urungus in the metal band Gwar, passed away Sunday in his home. He was 50 years old.
SHOW TRANSCRIPT

David Brockie, frontman for the legendary metal band Gwar, was found dead in his Richmond, Virginia home Sunday at the age of 50.

Local magazine Style Weekly first reported the news of Brockie's death, saying his roommate found the deceased singer Sunday afternoon. The cause of death is still unknown, but police have ruled out foul play.

Brockie was better known to his fans as Oderus Urungus, the extraterrestrial lead singer of the band Gwar. Formed in 1984, Gwar combined obscene and provocative thrash metal with elaborate costumes and gory, taboo-breaking stage shows.

As Urungus, Brockie also made a surprising number of appearances on daytime television, including this bizarre interview with Joan Rivers. Gwar also made an appearance on Jerry Springer, and fed the show's host to an alien monster onstage. (Via Fox / "The Joan Rivers Show", NBC / "The Jerry Springer Show")

Most recently, Brockie signed on to Fox News panel show Red Eye as an interplanetary correspondent. "We bombed the hell out of the moon 5,000 parsecs ago. It's a waste of time."

Brockie's passing has left many in the metal world reeling. Former Gwar bassist Mike Bishop said of Brockie, "His penchant for scatological humors belied a lucid wit. ... A great frontman, a great painter, writer, he was also a hell of a bass guitarist. I loved him." (Via Rolling Stone)

And Lamb of God guitarist Randy Blythe shared this picture of  Brockie on Instagram, writing "Dave TRULY WAS ONE OF A KIND- I can't think of ANYONE even remotely like him. That's VERY HARD TO SAY."

Brockie is the second Gwar member to pass away unexpectedly — in 2011, guitarist Cory Smoot, aka Flattus Maximus, died after he suffered a heart attack on the band's tour bus.