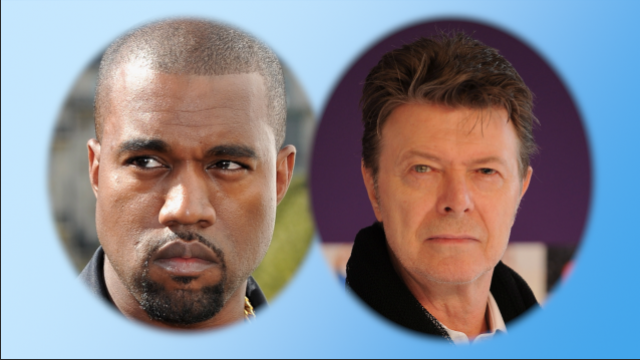 SMS
David Bowie Fans Sign Petition To Stop Kanye West Tribute Album
By Ryan Biek
By Ryan Biek
January 20, 2016
The mere rumor of a Kanye West tribute album to David Bowie was enough for the late rocker's fans to start a petition against it.
SHOW TRANSCRIPT

Thousands of David Bowie fans are so opposed to Kanye West recording a tribute album to the late singer, they've signed a formal petition to try to prevent that from happening. Ever.

Kanye hasn't even officially announced plans for the album, but that hasn't stopped more than 8,000 people from signing a petition on 38 Degrees to stop the rapper from recording any Bowie covers. (Video via Def Jam Recordings / Kanye West)

The rumor stems from a Daily Star article in which anonymous sources say he's recorded a few songs, singing straight covers on some and adding raps to others.

Kanye has made it well known on Twitter that Bowie inspired him.

But fans may be right to be so protective of the rock star's legacy.

Coldplay members have famously recounted how Bowie turned them down for a collaboration. Drummer Will Champion told NME, "He was very discerning — he wouldn't just put his name to anything." (Video via Parlophone UK / Coldplay)

Kanye's no stranger to petitions, though, like the one last year calling for the Glastonbury Festival to replace his headlining slot with a rock band. It got over 130,000 signatures.