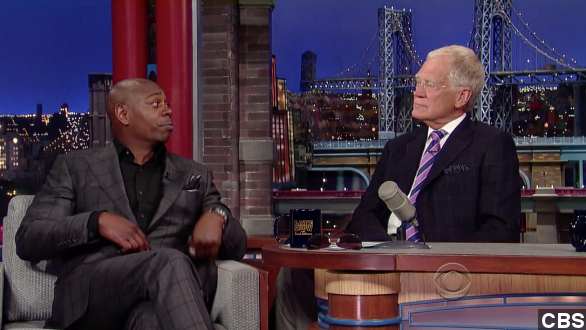 By Brice Sander
June 11, 2014
Dave Chappelle stopped by the "Late Show" and opened up to David Letterman about his abrupt exit from "Chappelle's Show" in 2005.
SHOW TRANSCRIPT

If you remember, Chappelle walked away from "Chappelle's Show" — and a $50 million contract — in the middle of the show's highly successful and critically acclaimed third season in 2005.

The comedian disappeared but popped up in South Africa soon after. As Time notes, the bizarre escape led to rumors about drug abuse, mental instability and problems with Comedy Central.

Chappelle reiterated those claims in this new interview with David Letterman, suggesting his abrupt exit from "Chappelle's Show" was because he felt the deal was unfair, even it it was worth $50 million.

​"It's like getting divorced in the '50s. People didn't go to divorce court. They just look at their wife like: 'Babe, I'm gonna go get a pack of cigarettes. I'll be right back.'"

​​Mashable says Chappelle offered up more hints than ever in this interview, suggesting he was mistreated by the network. Still, he has no regrets. He told Letterman:

"I made a series of decisions. ... It's very hard to go through something like this because no one has really done it before. So there's not too many people that don't think I'm crazy."

OK, there might be one regret — Chappelle joked a lot about wishing he had that $50 million paycheck. CraveOnline pointed out one line in particular: ​"The only difference between having $10 million and $50 million is an astounding $40 million. Of course I would like to have that money."

CarterMatt was left a little let down by all the jokes, saying Chappelle continued to evade giving a straightforward answer about his exit. "Ultimately, this is just something that we may never quite get a full answer on, just because the comic wants it to be that way."

But Slate says, exactly — that's Chappelle's style. This was his first late-night interview in six years and he was "remarkably subdued ... seeming alternately guarded, thoughtful."

And Chappelle is still working. He's got a series of live shows at Radio City Music Hall later this month.