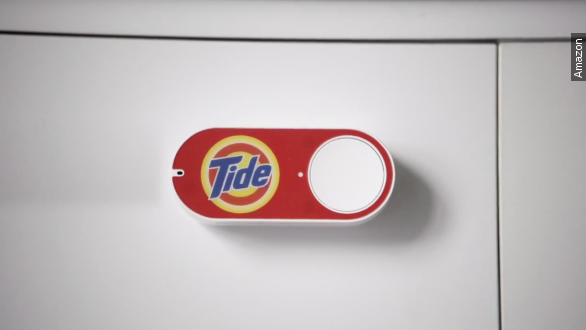 SMS
Dash Button Shows Amazon Is Going After Grocers
By Cliff Judy
By Cliff Judy
March 31, 2015
Dash Button enables you to order regular household items with the push of a button, yet another play by Amazon to grab everyday customers.
SHOW TRANSCRIPT

Once again, Amazon has released a slick video highlighting something we'd all love to have, complete with that dreaded moment we can all relate to.

The Amazon Dash Button is the company's latest attempt to put all of your purchasing in one spot.

The small tabs connect to WiFi and can be placed anywhere using the adhesive tape on the back. Whenever you click them, it sends an order to Amazon for that particular product along with the size and quantity you've predetermined.

Amazon lists 228 products you can get with the Dash Button. You'll notice the types of purchases you can make line up pretty well with what most of us grab during grocery store runs, and the video seemed to highlight those products where a shortage can creep up on us.

As The Verge put it, "The future where you can just be lazy and spend money with a push of a button from Amazon is here, and it's very real."

So to review, you're buying household products without leaving the house, from a company known for undercutting the prices of the competition. (Video via Bloomberg)

Not great news for the average grocery store, which the federal CDFI Fund estimates already only makes 1.9 percent profit.

Amazon is also working with developers to put the same Dash tech into devices. For instance, Brita will have a water pitcher that measures how much water passes through its filter and then automatically orders a new filter for you.

The Dash Button is invitation-only for Amazon Prime members. For those of you who do snag a device, if you accidentally push the button a second — or even tenth — time, Amazon says the device only responds to your first push until your order's delivered.