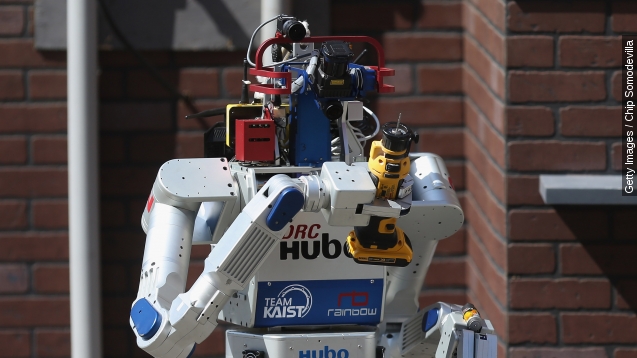 SMS
DARPA Contest Aims To Build A Better Disaster-Response Robot
By Evan Thomas
By Evan Thomas
June 7, 2015
DARPA intends to use advances in human-style robotics, like those seen in this competition, to develop better disaster-response robots.
SHOW TRANSCRIPT

Each robotic competitor got a one-hour window to drive a car, open doors, pull levers, turn knobs and saw holes in walls, mostly autonomously and completely untethered. (Video via DARPA)

This parade of robotic dexterity got its start following the Fukushima nuclear disaster in 2011. (Video via BBC)

DARPA's competition pitted international teams against one another in an effort to put robotic development on the fast track. (Video via DARPA)

The ultimate goal is to create robots that can enter areas too dangerous for humans to do important jobs. (Video via Al Jazeera)

Because for all their ungainly appearances — and occasional balance issues — robots do better with hard radiation than humans. (Video via DARPA)

"No. 1 concern is human life. This type of technology, in any operations — humanitarian assistance, disaster response — is to save lives," said Brig. Gen. Greg Nelson. (Video via DARPA)

The robots are designed to bear at least some resemblance to humans because they'll be doing tasks people normally would. Engineer Darwin Caldwell explains:

With the payout of finalist prizes, DARPA is done with the contest. But the agency intends to apply the technologies and strategies the teams developed to future robotics projects.