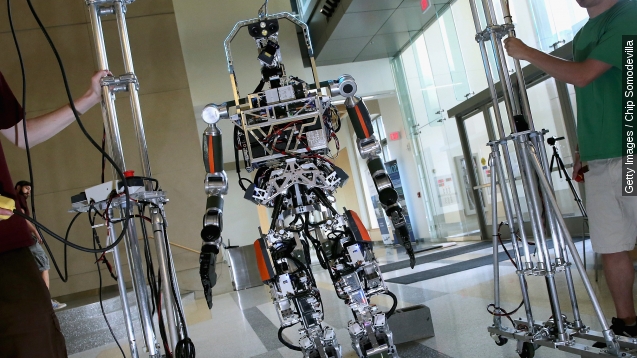 It isn't exactly "Transformers" over there but DAPRA's annual robotics competition continues to be a pretty interesting chance to look at the state of modern robotics.

For the Pentagon-sponsored competition teams from around the world participate in a series of challenges in order to earn the top spot and score $3.5 million in funding from the Department of Defense.

The challenge aims to encourage developers to make robots to assist with disaster relief. This year's tasks were based around 2011's nuclear disaster in Fukishima, Japan.

Robots had to carry out tasks like driving and getting out of a car, turning a valve, cutting a hole through a wall and crossing a debris field, either by walking over it or clearing a path.

And the nature of this year's challenges has produced a lot of robots that have two arms, two legs and kinda look like humans, which makes the occasional flop that much more entertaining.

In the final rounds of the competition on Friday and Saturday the robots have to operate semi-autonomously, meaning that a team member can help their robot identify an objective but the movements can't be controlled remotely.

A spokesman for the event admitted to the BBC that the tech is still about a decade away from practical use but said this event is about spurring innovation in an industry still very much in it's infancy.