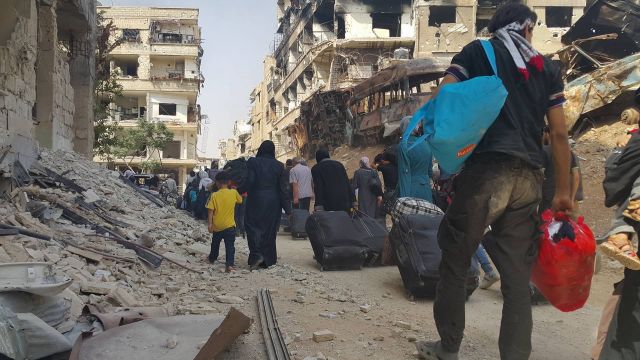 SMS
'Tell The World We Want Freedom': The End Of The Daraya Siege
By Jake Godin
By Jake Godin
August 26, 2016
The siege of Daraya began shortly after residents blamed the Syrian regime for the deaths of hundreds of civilians.
SHOW TRANSCRIPT

The siege of the Damascus suburb of Daraya is finally over. Rebels and a regime delegation signed a truce allowing civilians and fighters transportation out of the destroyed city.

Daraya has endured years of barrel bombs, surface-to-surface missiles, starvation and incendiary bombs. During that time, the city received just two aid deliveries — only one of which had food in it.

As part of the evacuation, civilians will go to another city near Damascus, while fighters will be transported to the northern Syrian province of Idlib.

Photos and video posted online by activists showed residents paying final respects to their dead in the city's graveyard before dragging luggage to regime-provided buses.

One activist who we spoke to had this to say: "Tell the world we want freedom. Tell them that the great powers do not want us to be a free people."