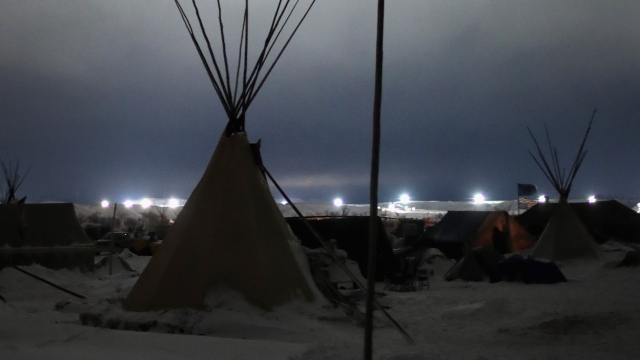 SMS
DAPL Protesters Plan To Stay Despite The Risks Of A Harsh Winter
By Jake Jones
By Jake Jones
December 4, 2016
The camp has seen rigid temperatures, threats of arrest and a blockade.
SHOW TRANSCRIPT

The protesters' main campsite is on federal land. The U.S. Army Corps of Engineers has warned them that public access to the site will be cut off Monday.

But the people appear to be preparing for a longer stay. With more snow forecast for the coming weeks, they spent their time building and reinforcing structures to keep out the cold.

A group of U.S. veterans also made the trip to the Oceti Sakowin Camp to act as human shields between protesters and police.

In a letter to President Obama dated Friday, Amnesty International said its teams observed "an over-militarization of law enforcement in response" to the protests and called for an end to the pipeline's construction.

The protesters, who call themselves "water protectors," are worried the pipeline could leak oil into their water supply. They've been calling for an end to the project for months.

That call has gotten louder since the election of Donald Trump, who has voiced support for the pipeline being built.

Multiple reports have claimed Trump also owns stock in Energy Transfer Partners, the company building the pipeline, though a spokesperson for Trump has disputed some of those claims.