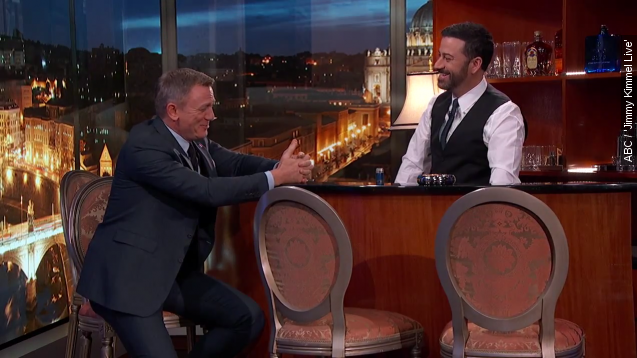 Is it time for James Bond to break his martini habit? Daniel Craig tried out a few new drinks on "Jimmy Kimmel Live."

For decades, James Bond has been ordering the same iconic drink.

But Daniel Craig, the current James Bond, decided it was time for a change and tried out a few different cocktails on "Jimmy Kimmel Live."

"I'll have a strawberry daiquiri, served with coconut, with a scoop of lemon sorbet and two umbrellas. Wait, make that three umbrellas," said Daniel.

That doesn't really have same ring to it. He should probably just stick with his trademark, and it probably wouldn't hurt to be a bit nicer to his bartenders. (Video via Sony Pictures / "Spectre")

"I have a pen here from the Four Seasons that has bullets in it," Craig said.

Just stick to what works, Daniel. After all, the newest Bond flick, "Spectre," just dominated the box office for the second week in a row. (Video via Sony Pictures / "Spectre")