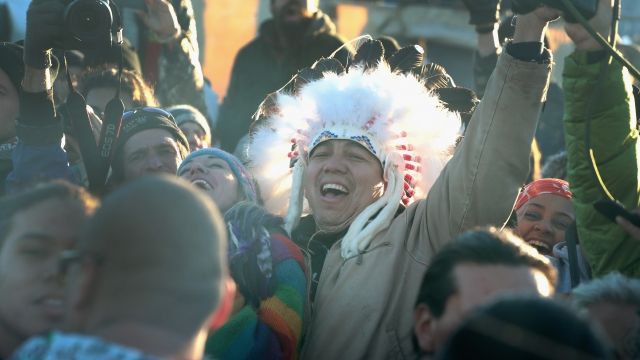 SMS
The Battle Over The Dakota Access Pipeline Might Not Be Over Just Yet
By Briana Koeneman
By Briana Koeneman
December 5, 2016
The decision to halt construction comes just before President-elect Donald Trump is set to take office. And he could decide to move forward with it.
SHOW TRANSCRIPT

Some protesters are packing up camp after the U.S. Army Corps of Engineers announced Sunday it will not allow the Dakota Access Pipeline to be built along its current route.

It was a huge victory for the Native Americans and environmental groups who have been protesting the construction for months. But their fight might not be over just yet.

The decision to stop the $3.7 billion pipeline from running under Lake Oahe comes just weeks before President-elect Donald Trump is set to take office.

The Corp's decision calls for an environmental study of alternate pipeline routes. That study could take months or even years to complete.

But the Trump administration could decide to move forward with the original route. His camp has yet to comment on the announcement, but he has previously voiced support for the project.

In the meantime, many of the thousands of protesters — who prefer to be called water protectors — at the Standing Rock Sioux Reservation are packing up. That's good news for the Corps, who previously gave protesters until Dec. 5 to leave or face arrest.

But several campers have insisted on staying, saying they won't go home until authorities have left the area and the pipeline is shut down.