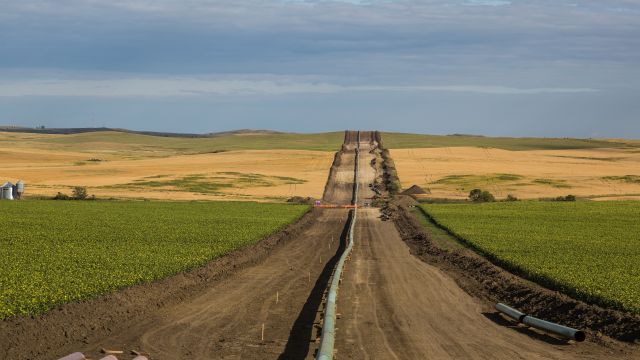 The oil pipeline construction that sparked nationwide protests is now complete, and the pipeline is in service.

The pipeline crosses a number of bodies of water, including the Missouri River, which is the main drinking water source for the Standing Rock Sioux Tribe.

Demonstrators lived in a camp outside the pipeline's construction site for months before the state ordered the camp be vacated in February.

The Standing Rock Tribe has pursued legal action in federal court to shut down the pipeline.

Standing Rock Tribe chairman Dave Archambault II said in a statement Thursday, "We will continue to battle the operation of this pipeline in court and remind everyone that just because the oil is flowing now doesn't mean that it can't be stopped."

The pipeline has leaked at least three times since March. The tribe alleges Energy Transfer Partners doesn't have a plan to "contain and clean a serious spill."

Combined with the Energy Transfer Crude Oil Pipeline, the Dakota Access Pipeline is expected to transport 520,000 barrels per day.