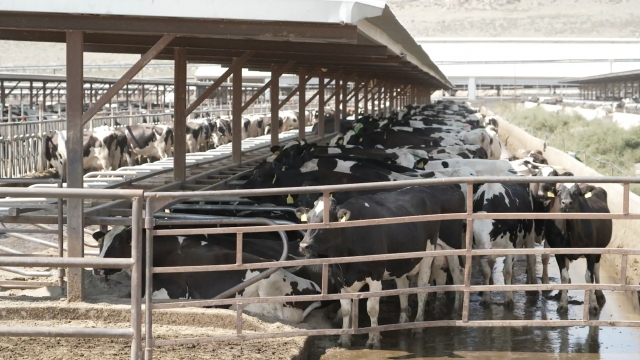 SMS
Dairy Farms Hit Hard By Megadrought Turn To Technology
By Scott Withers
By Scott Withers
October 15, 2021
The megadrought across the western U.S. is turning green pastures on farms brown. But new technology is providing some solutions.

Dairy farms as far as the eye can see, stretching across north central California.

The Beretta family has owned and worked one particular farm for four generations. The mega-drought is turning their green pastures brown.

Doug is the current Beretta leading the dairy, running most things just like his father and grandfather did for decades — caring for the cows and the land.

"We are totally out of irrigation water for our pasture," he said. "We've taken care of our aquifer because we haven't been pulling water out of the ground to irrigate. We've been able to utilize that city-reclaimed wastewater to irrigate pasture."

Santa Rosa turned to farmers years ago, asking them for help with the massive wastewater backlogs.

But the megadrought forced the city to redirect the water.

"We were cut back 30% on that irrigation water last year and another 30% this year," Beretta said.

No water means no cow feed growing in the fields, which forces the family to spend money buying feed.

"Usually, at this time of year, we might be using one truck and trailer load of hay a month. We're up to using three and that will go until, probably, next May or June," Beretta continued.

The Berettas already sold off 10% of their herd and more is likely to be sold if they can find buyers. Otherwise, some are heading to the slaughter house.

NEWSY'S SCOTT WITHERS: It seems like you're getting it from all sides. The drought causes less water, which causes less feed.

The five-decade-old farm is dealing with drought and feed shortages as well. Rising out of their field is a high-tech solution. The farm is not only embracing technology, but creating it.

"I'm not aware of another facility where, on a working farm, you have indoor robotic milking, fed by indoor controlled-environment feed with a science center on the location," Grov Technology President Steve Lindsley said.

The farm is partnering with Grov Tech, the company behind a massive automated indoor feed-growing facility.

WITHERS: Each tower, you said, replaces up to 50 acres of growing feed.

STEVE LINDSLEY: Exactly. So, you're looking at 875 square feet on the ground. Each one of those towers represents up to 50 acres grown on 5% or less of the water.

The automated system fills trays with seed, then heads into the first tower. There's recirculated water flooding each one. The seeds germinate over three days. Then they move to another tower. For the rest of the week, there's intense lighting, speeding up the growth cycle. The system dumps the mats on a conveyor belt, heading out to feed the cows. It goes from seed to feed in seven days, using just 5% of the water for feed grown in a field.

"Put your hand on that and feel that root mat. It's filled with water. So the amount of water that you actually have to feed the animal is far less, because a lot of the water the animal needs is in the feed," Lindsley said.

The Batemans mix the high density nutritious feed with traditional feed, eliminating the need to buy any.

"'I'm an economist.' Somebody tells me that, I say, 'At what price?' And you know, maybe it'll pay off," UC Davis Professor Daniel Sumner said. "There's nothing like that that's in widespread use anywhere I know. But that'd be great. And I can tell you if that works, it'll spread like wildfire."

GrovTech is working with other farmers to develop scalable models.

"If you just wanted to feed 200 cows, you just build one tower," Lindsley said. "It's modular to be able to meet the needs on the farms."

Back in California, feed is the need on the Beretta Farm.

The family's options are dwindling in the grip of the megadrought.