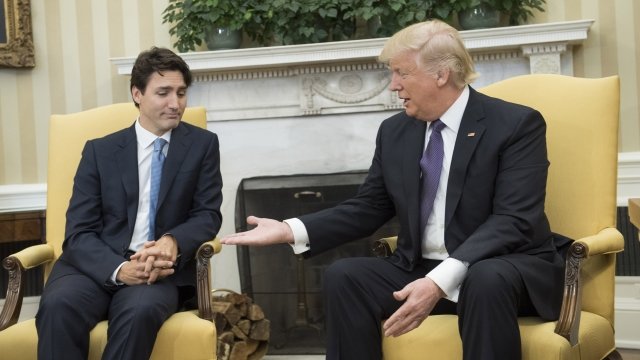 By Cristina Mutchler
September 11, 2018
Media outlets report Canada could offer a compromise on its dairy market in order to reach a NAFTA agreement.
SHOW TRANSCRIPT

The U.S. and Canada resumed NAFTA trade negotiations Tuesday, which both Canada's Foreign Minister and President Donald Trump said are productive so far.

But Canada's dairy market and auto tariff threats could have an impact on how the talks turn out.

Media outlets report that Canada may offer a compromise on dairy in order to reach a trade agreement by the Oct. 1 deadline. That could include giving the U.S. certain access to its dairy market, something American farmers and President Trump would likely applaud. Currently, Canada keeps dairy product imports on a tight quota, and has implemented a pricing system designed to benefit Canadian farmers.

And earlier Tuesday, Canadian Prime Minister Justin said his country wouldn't give in to any pressure from Trump, who's threatened auto tariffs if they can't strike a deal. Trudeau also warned of "massive disruption" to the auto sector, including job losses for both countries, should Trump follow through on that threat.

The two sides are aiming to come to an agreement by the end of September. The U.S. hopes Canada will agree to the terms of a preliminary trade deal it made with Mexico last month.

Congress would still need to consider and ratify the deal.