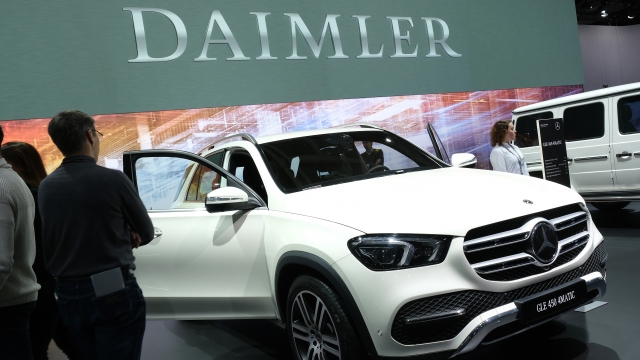 SMS
Daimler To Lay Off Thousands Of Workers Over 2 Years
By Terace Garnier
By Terace Garnier
November 29, 2019
Daimler, which makes Mercedes-Benz, says laying off workers will allow it to invest money into electric cars.
SHOW TRANSCRIPT

It's the holiday season: a time when many companies are looking to hire seasonal workers.

But one major automaker announced it will be cutting at least 10,000 jobs worldwide.

Daimler, which makes Mercedes-Benz, says laying off workers will allow it to invest in electric cars.

Daimler currently employs more than 300,000 workers in factories across the globe.

According to the BBC, a Daimler spokesman said "a tenth of managers" and "thousands of administrative staff" will get axed over the next two years as it tries to save 1.4 billion euros.

The company may also offer part-time retirement and severance programs to workers at its headquarters in Germany.

"The automotive industry is undergoing the greatest transformation in its history."

He also said: "The development towards CO2-neutral mobility requires large investments, which is why Daimler announced in the middle of November that it would launch a program to increase competitiveness, innovation and investment strength."

The German car industry has been hit by falling profits and sales due to a combination of factors including trade wars, a failure to quickly "adapt to new technological trends" and decreasing demand in China.