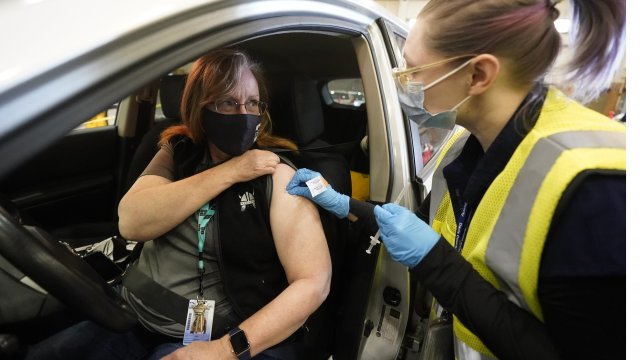 In a fight to move fast, the coronavirus is outpacing Operation Warp Speed. COVID-19 deaths hit another single-day high: more than 4,000.

And more than 380,000 Americans have now died, according to Johns Hopkins University.

Arizona, California and Rhode Island are the hot spots now.

Arizona facing high hospitalization and death rates, according to the COVID Tracking Project.

“We run our butts off, we fight so hard for these patients. Lot of time it feels it's for nothing. Not for nothing, we're going to fight no matter what. Just to see the amount of people that don't make it out. ... That's hard.”

Distribution of a vaccine remains a sluggish nightmare. Some places don’t have enough supply. Others, believe it or not, report a lack of demand.

"Well, the single biggest frustration is simply quantity of vaccine in the state."

"We were always going to have far more demand even after we strictly limited eligibility than we had supply.”

"We have vaccine centers ready to go, but we don’t have people to vaccinate.”

"It's time to move on to the next phase of the vaccination campaign.”

The next phase releases the entire vaccine supply, changes how it’s allocated, expands who administers doses and who receives them.

More senior citizens are receiving the vaccine. The minimum age varying from place to place at 65, 70 or 75. Mass vaccination sites are popping up from hubs in Texas. Drive-thru sites in Arizona and Utah to venues like Atlanta's Mercedes-Benz stadium and Disneyland.

It’s full steam ahead even as millions of vaccine doses sit in vials.